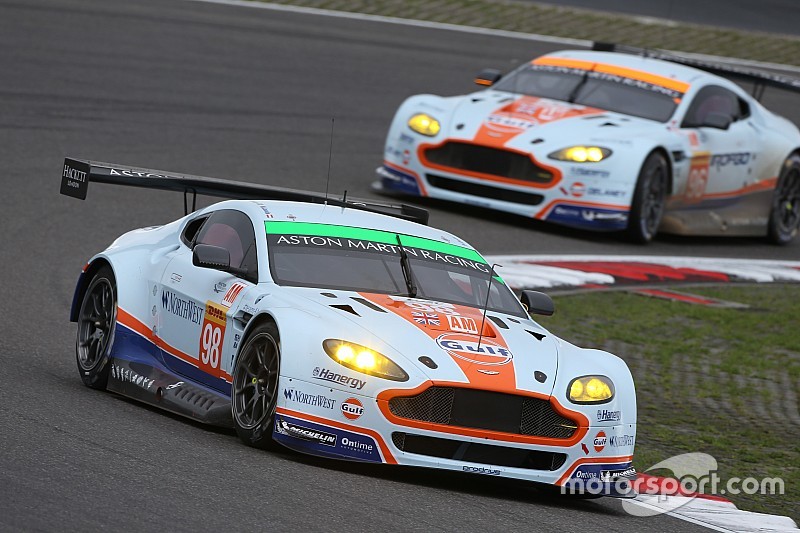 It was the #95 Young Driver AMR car that qualified fastest of the five identical Aston Martin Racing V8 Vantage GTEs.

It was the #95 Young Driver AMR car of Marco Sørensen (DN) and Christoffer Nygaard (DN) that qualified fastest of the five identical Aston Martin Racing V8 Vantage GTEs. The pair will start Sunday’s race from third on the grid of 14 GTE cars from Aston Martin, Ferrari, Corvette and Porsche.

We’ll start from second position so hopefully we’ll get a good position in the end.

“I’m really happy that we are in the top three as it gives us the opportunity to fight for the podium and get some good points for the championship,” said Sørensen. “The qualifying performance was great for both of us and I’m looking forward to seeing what we can do in the race.”

In the GTE Am class, Pedro Lamy (PT) and Paul Dalla Lana (CA) will start the race from second place, alongside team-mate Mathias Lauda (AT). After a great start to the season, they will be looking to take their third win of the year to close the gap on the championship lead.

“We both really pushed hard to get those lap times,” commented Lamy. “We’ll start from second position so hopefully we’ll get a good position in the end.”

The #99 Vantage GTE will start the fourth round of the WEC from fifth and the #97 from sixth. Tthe #96 will start from sixth in the GTE AM class and 12th overall.

The WEC Six Hours of Nürburgring starts at 1300hrs on Sunday 30 August. Fans in the UK can watch on Motors TV at 1200hrs and fans world-wide can live stream via the Official FIA WEC App.

Both Porsche 919 Hybrids on front row for home race