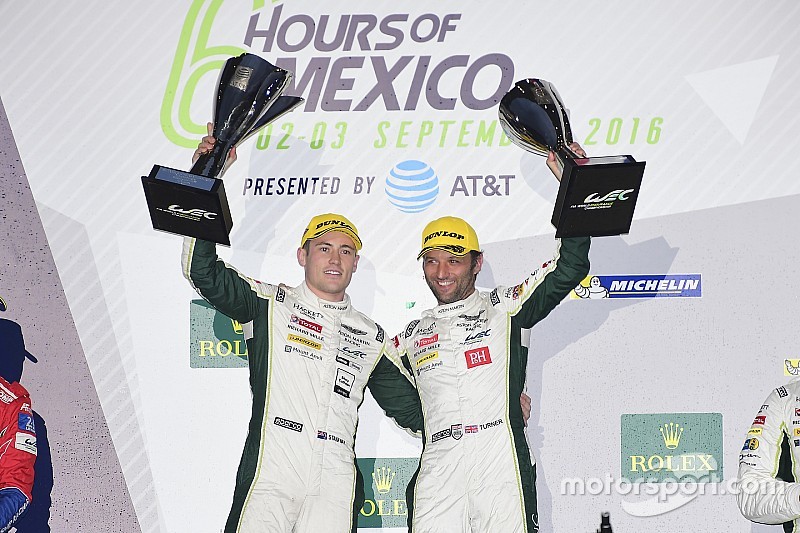 Mexico City - Aston Martin Racing is celebrating an emphatic victory, as the British squad claimed a 1-3 finish at the FIA World Endurance Championship (WEC) 6 Hours of Mexico, with an Aston Martin Racing entry leading the GTE Pro category for the entire race.

Having built a commanding lead in the initial 3 hours of the race, the advantage allowed the team to take a lower risk strategy in the tricky conditions and maintain the lead to the finish. The result leaves Turner leading the GT Drivers Championship on 86 points.

Like all things in motorsport, you get out what you put in,

Speaking after the race, Turner said, “What a race! That had everything in it. I think the turning point was Richie’s stint in the wet when he was running on slicks. That really put us in a great position and broke the back of the race for us. It was a great result for everyone in the team and especially for Dunlop to get their first win in GTE Pro with us. This helps hugely with the manufacturer’s championship points and I think we can go forward for the rest of the flyaway rounds with the confidence that we’re in good shape to take on the title fight”.

Stanaway added, “The car was really fast here this weekend and I was hoping it should have been a relatively straight forward race. Luckily when the rain hit we’d given ourselves a buffer and we were able to use that to cope with the changeable conditions. Dunlop have made some great ground and the tyre was really good all weekend and I’m really happy for Aston Martin Racing. It’s our first win of the season and I’m glad Darren and I were able to get this result for them”.

The #95 V8 Vantage GTE of Nicki Thiim (DN) and Marco Sørensen (DN) also took their place on the podium in 3rd. Despite essential bodywork repairs made to their V8 Vantage GTE after an incident on the four hour mark, the pair drove superbly to ensure a podium finish.

After taking their place on the podium, Sørensen said, “It was good to get the podium but I had to drive with a little bit of anger for my final stints to get the best result possible. It was great to finish P3 again but I’m also a bit disappointed because we’ve been searching for our first win in GTE Pro. I haven’t got this yet but this gives me even more determination to perform next time out at Austin”.

The result leaves the #95 entry of Thiim and Sørensen leading the GTE Pro Team Championship on 83 points and Aston Martin Racing leading the overall GT Manufacturers title on 179.

Speaking on today’s result, Team Principal Paul Howarth said, “What a week the whole team has had. From the very first session the whole team has committed to achieving our end goal of winning and to have both Pro cars on the podium. Of course a 1-2 would have been brilliant, but the #95 crew did an outstanding job to get the car back into a podium position”.

He added, “Like all things in motorsport, you get out what you put in, which is a true testament to the Aston Martin Racing ethos. Dunlop’s contribution to this weekend’s result has been to the highest level, like all of our partners, and they’ve committed to Aston Martin’s bid to become world champions. We leave here as championship leaders and head to Austin in just over a week’s time with great confidence”.

Aston Martin Racing returns to the FIA World Endurance Championship in Austin, with the 6 Hours of the Circuit of The Americas taking place on Saturday 17 September.