Ingolstadt - Audi is facing a big challenge at round four of the FIA World Endurance Championship (WEC) in Brazil on September 1. Having claimed four victories to date  including the Le Mans 24 Hours  the Audi R18 e-tron quattro has remained unbeaten in the 2013 season. The squad of Head of Audi Motorsport Dr. Wolfgang Ullrich and Chris Reinke, Head of LMP, is aiming to continue these results on the demanding race track of São Paulo. 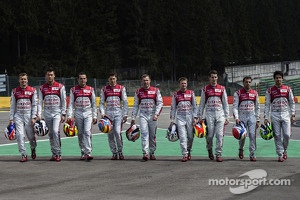 The tradition-steeped 4.309-kilometer circuit in the south of Brazils biggest city poses a challenge to any race driver. Major uphill and downhill gradients, a tarmac surface with little grip, varying inclinations of the track and a demanding combination of slow and a few fast turns require plenty of talent.

In addition, the drivers and mechanics have to get used to the direction of travel as the circuit is driven counter-clockwise. Especially the neck muscles of the drivers are subjected to a different strain than usual. And the team does not refuel the race cars from the garage in the pit lane but from the opposite side.

Whereas the conditions for the two Audi driver squads are equally challenging, their starting bases are highly different. Loïc Duval (F), Tom Kristensen (DK) and Allan McNish (GB), following their Le Mans victory  Audis twelfth one in total  are traveling to South America with a 30-point advantage.

Their team-mates  the reigning World Endurance Champions Marcel Fässler (CH), André Lotterer (D) and Benoît Tréluyer (F)  are the runners-up in the standings, trailed by the drivers team of challenger and last years winner Toyota, with just one point less to its tally. The battle for race wins between the two manufacturers reflects a score of 6-3 for Audi. 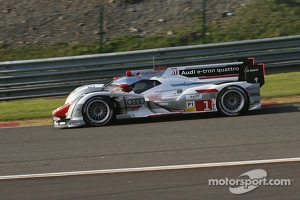 São Paulo is the fourth of eight races of the season. A maximum of 130 points are yet to be awarded until the finale. Audi has thoroughly prepared for the second half of the season. The Audi R18 e-tron quattro won the Sebring 12 Hours and subsequently the WEC rounds at Silverstone, Spa and Le Mans.

At São Paulo, due to the track characteristics, Audi Sport Team Joest is returning to the shorter body version with high downforce after the R18 e-tron quattro had previously triumphed as a long-tail version at Le Mans.

Lucas di Grassi (BR), who a year ago celebrated his debut with Audi Sport at Interlagos and mounted the podium in third place on his debut at Le Mans, is supporting Audi in his home country of Brazil. As planned right from the beginning of the season, the race driver, who hails from São Paulo, is not part of the group of registered drivers at the overseas races but will be communicating his impressions of the Audi R18 e-tron quattro to media, VIP guests and spectators on location.

To the fans who will not be visiting the race Audi offers live streaming at www.audi-motorsport.com. A live ticker is available as well via the Audi Sport App and on Twitter. In addition, further background information from Brazil will be provided on Facebook.

Dr. Wolfgang Ullrich (Head of Audi Motorsport): "On achieving the success at Le Mans, Audi celebrated its fourth sports car victory in the 2013 season. Thats a nice string of success but Im sure that well still be seeing a very thrilling battle with our competitor Toyota this year. Naturally, were aiming to win in Brazil this year too. Weve prepared well for the second half of the season and are all very motivated to clinch strong results in the remaining rounds."

Chris Reinke (Head of LMP): "After what has been a very successful season so far we intensively worked toward the overseas races. The two Audi R18 e-tron quattro cars that were completely rebuilt by Audi Sport Team Joest were subjected to detailed inspections in Ingolstadt because the chassis do not return to Germany between the events. A year ago, we experienced the Brazilian debut, so now were able to tackle the race with a solid database and corresponding simulations. With the drivers of cars number 1 and 2 we continue to have two irons in the fire in the battle for the prestigious World Champions title, with five more races to go."

Ralf Jüttner (Technical Director Audi Sport Team Joest): "Following the hard work up to Le Mans and the sweet reward for it, were now battling for the World Championship. We thoroughly prepared the cars and our material for the overseas races. The two R18 e-tron quattro cars embarked on the journey by air on Tuesday. Our priority is to battle for the manufacturers title in the remaining WEC rounds. All six race drivers are joining forces to achieve this aim before the battle will subsequently be about the decision in the drivers championship as well."


-Won the WEC race at Spa together with his team-mates.
-Is currently in second place of the standings.


"Im very much looking forward to the second part of the season when other great race tracks are coming up for us  starting with the tradition-steeped circuit in Brazil. The whole Audi team is presenting a very strong stance. In terms of points, my two fellow drivers and I are trailing our team-mates. Well only have a chance of winning the title if we finish each race in front of them. Im looking forward to this challenge."


-Took second place in Brazil last year.
-Will be visiting his relatives in South America after the race.


"A year ago, I drove at São Paulo for the first time. The track is fantastic. Its a venue with a great motorsport history. Furthermore, Im a fan of Ayrton Senna, who thrilled so many spectators in his home country. Unfortunately, we werent able to win in Brazil last year. Thats why weve still got some unfinished business. In the World Championship, weve got to reduce a large gap of 30 points  so now were starting to make our recovery. After the race, Im going to travel to Peru to visit my fathers family."


-Visited the prestigious Crankworx mountainbike race in the summer and has personally completed numerous kilometers on a mountain bike.
-Started restoring a 62-year-old René Gillet motorcycle in July.


"A year ago, I finally drove on a track that I admired even as a child while watching Formula 1 races on TV  Interlagos is unique. I was a bit surprised about how little grip the tarmac there offers. Thats why our Brazilian debut was very difficult. We arrived without any track experience and had to admit defeat. Since then, weve clearly developed the R18 e-tron quattro further and, in addition, weve now got the track data. For my team-mates Marcel Fässler, André Lotterer and me, its about starting a recovery in the points-standings in Brazil. Were extremely motivated."


-In June, celebrated his first victory at the Le Mans 24 Hours
-Has never been to Brazil before


"The track at São Paulo is new territory for me. Im excited about it. Media interest was huge after our Le Mans victory. Id never experienced this dimension of queries in my motorsport career before. Now the World Championship is entering its decisive phase. Audi has prepared well and I revved up my training program again after a relaxing summer. Im expecting a thrilling battle with our opponent Toyota."


-The ninth Le Mans success marked his second WEC victory of the season.
-Has a special liking for the circuit in Brazil.


The track at Interlagos, in a way, is a classical autodrome that has changed into a modern circuit. Last year, our team boss Reinhold Joest showed us what the track configuration was like when he was still racing himself.

As drivers, we like the track a lot. Its got everything: fast and slow turns, blind corners, downhill sections and sections that go uphill  peppered with many braking zones. Itll be a big challenge in front of a crowd thats incredibly enthusiastic.


-Celebrated his third Le Mans victory in June.
-Expects Audi to be significantly stronger than last year in Brazil.


"Following our Le Mans victory and the large number of media and marketing commitments Im now looking forward to the race in Brazil. The picture that presents itself there might be different than in the first races that were held on fast, fluid tracks. At Interlagos, many very slow corners are awaiting us. Toyota will be a strong rival, so we need to clearly improve compared to last year. The engineers have improved our hybrid system, which particularly helps us in accelerating out of the last turn. A solid grasp of the situation when overtaking GT vehicles is important too."

Facts on the 13th Le Mans victory of Audi