Ingolstadt - Audi had to master a particularly challenging task before the 2014 season. Since the brand entered Le Mans prototype racing in 1999, the safety rules have never been as strict and a race car as complex as this year. At the same time, the car is allowed to be lighter than ever before. 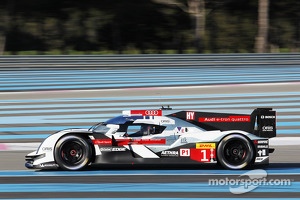 Design engineers  whether in production or race car engineering  are tasked to resolve target conflicts on a daily basis. However, the concept design of the new Audi R18 e-tron quattro confronted the engineers at Audi Sport with a particularly challenging requirement. On the one hand, the racing weight of the LMP1 cars compared to last year is allowed to decrease from 915 to 870 kilograms. 45 kilograms less weight make a significant difference in racing.

At the same time, the new technical regulations contain various requirements that call for completely new solutions which lead to an increase in weight. For example, to protect the driver in the case of lateral impacts, the regulations prescribe Zylon side panels. This particularly tough and impact-resistant material prevents lateral intrusions of pointed objects in the cockpit in an accident. The monocoque itself had to be redesigned as well to withstand the higher test loads specified starting in 2014.

The eight wheel tethers (two per wheel) which are to prevent the separation of the wheels from the car in case of a crash are new as well. Furthermore, the 2014 Audi R18 e-tron quattro is equipped with a rear crash absorbing structure. This new component made of carbon fiber reinforced plastic (CFRP) absorbs the energy in a rear-end collision.

And, last but not least, the regulations now allow transmissions with seven instead of the previous six forward gears. The new gear pair and its actuation make a difference on the scales as well. The aggregate of all these measures corresponds to an additional weight of more than 20 kilograms, explains Dr. Martin Mühlmeier, Head of Technology at Audi Sport.

As a result, the engineers were tasked to make the newly designed race car even lighter than before  to compensate for this additional weight while achieving the lower minimum weight. Thanks to our constant development work there are no measures left that would yield major weight savings in a single step. Instead, the art lies in achieving further improvements of all the details, says Wolfgang Appel, Head of Vehicle Technology at Audi Sport.

Audi has consistently increased the CFRP content in the race car. In the 2014 season, the steering wheel column of the sports prototype is made from this material for the first time. However, this material continues to be prohibited in various areas. For instance, the wheel suspension elements still have to be made of metallic materials, according to the regulations.

Due to these regulatory specifications and technical options the room for maneuver becomes increasingly constrained year after year. In spite of this, Audi achieved its target weight in the R18 e-tron quattro for the current season. The diesel hybrid sports car meets the limit of 870 kilograms.

In total, the new Audi R18 e-tron quattro is safer, lighter and more efficient than any of its predecessors, and Audis light-weight technology has a major part in this. For more than 20 years, the company has been proving its expertise in this area in the development of its production cars as well.