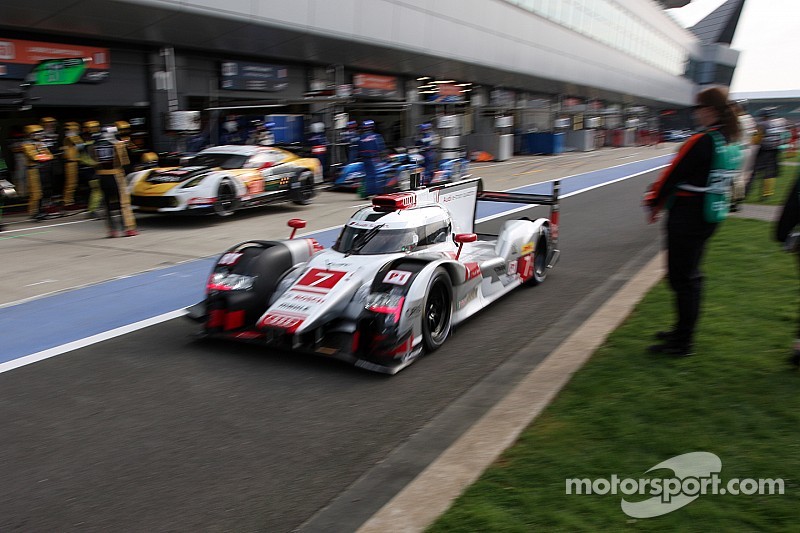 The three-time Le Mans winner, driving the #7 Audi R18 e-tron quattro that he shares with Benoit Treluyer and Marcel Fassler, set a 1m52.094s in the damp conditions at the very end of the session as a faint dry line started to emerge.

Audi enjoyed a significant advantage for most of the session, but in the dying moments Toyota's Kazuki Nakajima got to within 0.674s of Lotterer.

There was plenty of finding the limits from the 29-car field as they explored the wet Silverstone track during the 60-minute session. The most significant incidents befell the #2 Toyota TS 040 HYBRID driven by Mike Conway and the Signatech Alpine of Nelson Panciatici.

While Conway emerged unscathed from the Luffield gravel trap, Panciatici was stuck at Stowe after a spin beached the LMP2 car for the last 12 minutes of running.

The two Porsche 919 Hybrids placed third and fourth with the #18 car frustrated to not be able to catch up on lost time from yesterday, when they suffered a driveshaft issue that kept them in the pits for the first hour of session one.

In LMP2, Pipo Derani once again starred in the G-Drive Racing Ligier-Nissan as he set a 2m05.786s lap in the final moments of the session to usurp the Strakka Racing run Dome S103 Nissan.

The Strakka team, based close to the track eventually placed third, as the Oreca 05 driven by Matt Howson posted a late lap to claim second for the KCMG team.

Emmanuel Collard set the best LMGTE Am time of 2m16.396s in the AF Corse Ferrari 458 Italia that he shares with Francois Perrodo and Rui Aguas.

The qualifying sessions are scheduled to get underway at 12.00 local time.