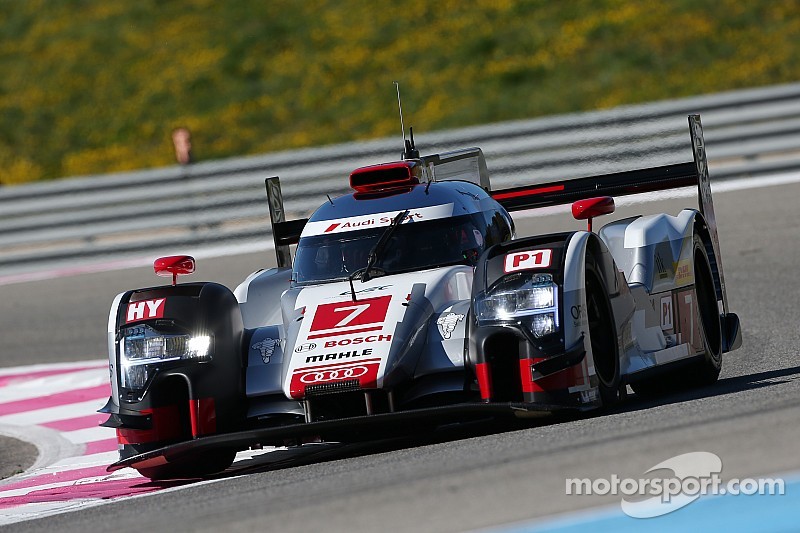 Audi tested the latest generation of its hybrid sports car on the high-speed track in France for two days.

Ingolstadt/Le Castellet -  Audi used the FIA World Endurance Championship (WEC) Prologue at Le Castellet to thoroughly prepare for the season opener. In the official track test of the racing series in southern France, the engineers tested the two R18 e-tron quattro cars that will be competing in the first WEC race in the United Kingdom.

Audi tested the latest generation of its hybrid sports car on the high-speed track in France for two days. Both Audi R18 e-tron quattro cars reeled off more than 2,500 combined kilometers and achieved many of the engineers testing requirements in the process. Audi Sport and Audi Sport Team Joest tested the durability of the tires supplied by partner Michelin, as well as various suspension kinematics, and gathered practical experiences for the racing commitments.

Audi Sport Team Joest and the six race drivers Marcel Fässler (CH), André Lotterer (D), Benoît Tréluyer (F), Lucas di Grassi (BR), Loïc Duval (F) and Oliver Jarvis (GB) experienced two intensive days. Pit stop practice sessions with driver changes sharpened the senses and reflexes of the drivers and mechanics for the first 6-hour race of the year that will be held at Silverstone on April 12. Filipe Albuquerque (P), Marco Bonanomi (I) and René Rast (D), the drivers of car #9 in the races at Spa and Le Mans, watched the test at Le Castellet as well and were closely involved in the teams work.

Following our tests at Aragon in January and at Sebring in March we again learned a lot at Le Castellet, said Head of Audi Motorsport Dr. Wolfgang Ullrich. The two days were profitable for the whole squad. The race cars completed their initial kilometers and will now be thoroughly prepared for the season opener. The test at Le Castellet in which we met with our competitors for the first time showed that we can look forward to a thrilling season.