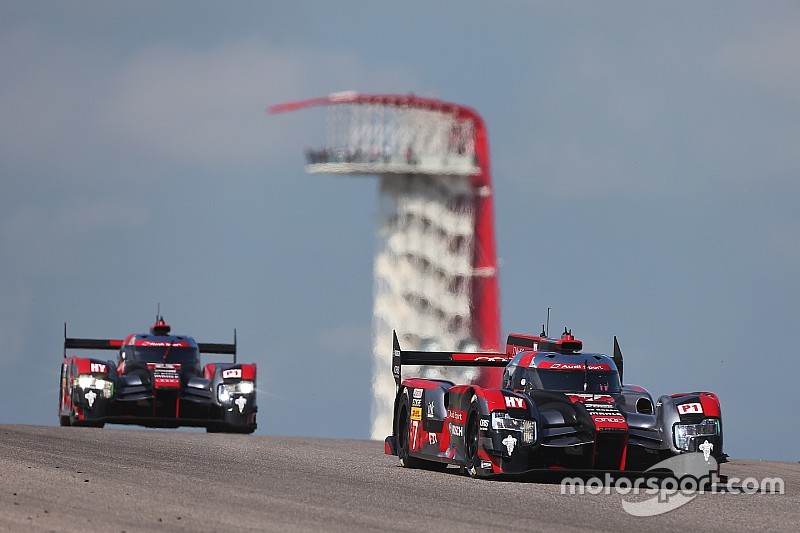 Audi dominated qualifying for the 6 Hours of COTA, locking out the front row in Austin as Porsche struggled to match its raw pace in warm conditions.

After topping all the practice sessions, the #8 R18 – qualified by Lucas di Grassi and Oliver Jarvis – had to settle for second behind the pole-winning #7 car of Marcel Fassler and Andre Lotterer.

Despite losing Fassler’s quickest lap due to exceeding its energy limit, Lotterer produced a stunning 1m45.7s effort to give the car an average laptime of 1m45.842s – 0.141s quicker than the #8.

Porsche took third on the grid with the #1 919 Hybrid qualified by Timo Bernhard and Brendon Hartley, but there was a shock when its #2 car lost fourth place late on when Romain Dumas had his quickest lap deleted for exceeding track limits.

That handed fourth position to the #6 Toyota of Mike Conway and Kamui Kobayashi, the duo dragging absolutely everything from their car to scalp one of the Porsches by a tenth.

The #5 Toyota will start sixth, after Sebastien Buemi had a couple of laps deleted, with the Rebellion outpacing the ByKolles CLM in the battle of the non-hybrids.

The points-leading #36 Signatech Alpine scored its first LMP2 pole of the season thanks to Gustavo Menezes and Nicolas Lapierre.

The #44 Manor Oreca will start second, but the big news here was #26 G-Drive’s disastrous session – all of Alex Brundle’s timed laps were deleted for exceeding track limits, so although co-driver Roman Rusinov was third fastest, it mattered not.

The RGR Sport by Morand Ligier will start third instead.

Aston Martin continued its successful streak from Mexico, with Marco Sorensen and Nicki Thiim edging a narrow GTE Pro pole position by 0.042s from the #71 Ferrari of Davide Rigon and Sam Bird.

The #66 Ford of Stefan Mucke and Olivier Pla will start third, ahead of the #51 Ferrari.

In GTE Am, Paul Dalla Lana and Pedro Lamy topped the class to give Aston even more cheer, ahead of the #88 Porsche.