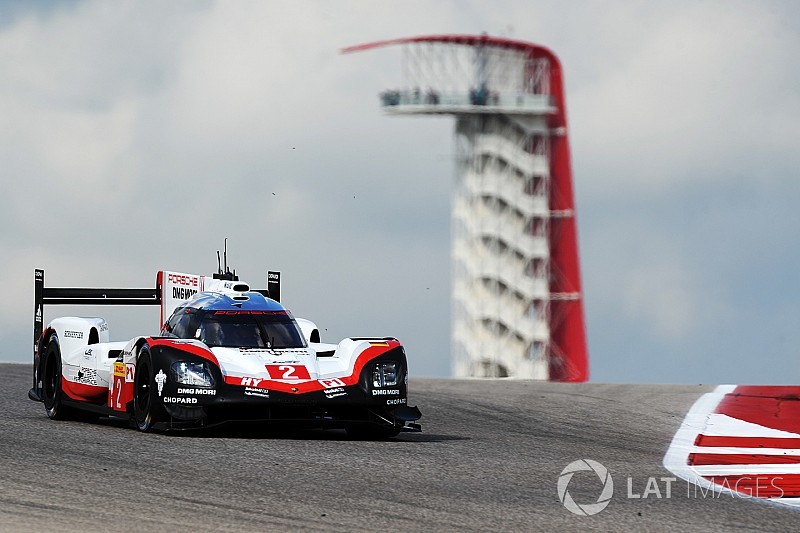 Bamber took the lead in the championship-leading #2 car with just eight minutes of the six-hour race to go, when Nick Tandy slowed and moved over in another display of team orders from Porsche in favour of its points-leading trio.

Tandy, Neel Jani and Andre Lotterer had the edge on their teammates around the Circuit of the Americas on a day that Toyota kept the German cars honest – at least for the opening half of the race.

Tandy moved over to let Bamber past for the first time with just over one hour to go, only to retake the lead when the #1 car needed less fuel at its final splash-and-dash pitstop.

He extended a narrow to lead to more than 10 seconds before backing off and then trailing the sister car across the line by just two tenths of a second.

Bamber said: "Congratulations to the #1 car – they drove a great race and would have deserved victory. And Toyota kept us on our toes, too."

Toyota led the race after the first round of pitstops after its pair of TS050 Hybrids double stinted their tyres.

The Toyotas remained within striking range through a mid-race safety car, though they ultimately didn't have the pace to challenge Porsche over the final third of the race.

Sebastien Buemi, Kazuki Nakajima and Stephane Sarrazin ended up third, just over 20s behind the winner.

Kamui Kobayashi, Jose Maria Lopez and Mike Conway were a similar margin back in fourth.

Reigning LMP2 champion team Signatech Alpine finally chalked up its first class victory of the season despite a late-race scare.

Nicolas Lapierre, Gustavo Menezes and Andre Negrao dominated the P2 on the way to a 20s victory aboard their Alpine-badged Oreca 07.

They had been nearly a minute up until stopping to change the rear bodywork to rectify faulty brake lights with minutes to go.

Second and third positions were taken by the two Rebellion Orecas.

James Calado and Alessandro Pier Guidi held on to take GTE Pro honours for the AF Corse Ferrari team despite twice losing a lead of more than half a minute.

They lost their advantage with the safety car only to rebuild it before a late-race rear puncture brought Pier Guidi into the pits.

The Italian rejoined right in front of the second-placed Porsche of Michael Christensen, but Pier Guidi was to pull away to a five-second victory over the 911 RSR the Dane shared with Kevin Estre.

Paul Dalla Lana, Mathias Lauda and Pedro Lamy came back from an early delay to notch up their second GTE Am win of the season for Aston Martin.

Dalla Lana needed a short trip into the garage to repair rear-end damage after he was hit by Francesco Castellacci's Spirit of Race Ferrari and spun, but still took class honours by 50 seconds from the Clearwater Racing Ferrari.

Bernhard column: Another win thanks to Porsche teamwork