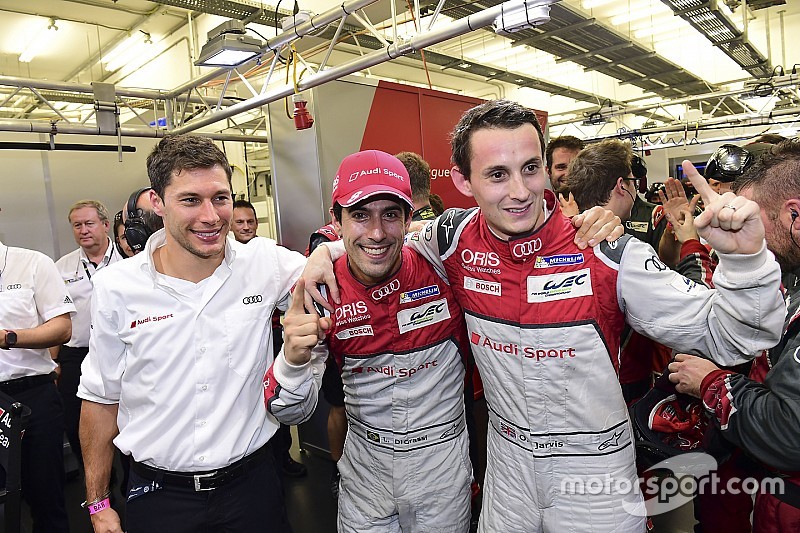 Audi will start its final race in the FIA World Endurance Championship from pole position, as the #8 car of Lucas di Grassi, Oliver Jarvis and Loic Duval beat the Porsches to the top spot in qualifying.

In the end, it was a scintillating lap of 1m38.828s by di Grassi in the closing stages of the session that ensured the Ingolstadt marque came out on top, with Jarvis' earlier time making for an average of 1m39.207s.

That was enough to overcome the #1 Porsche, started by Timo Bernhard, taken over by Brendon Hartley and then handed back to Bernhard, by 0.264s, with Bernhard's best effort a full half-second slower than that of di Grassi.

Audi's second car, the #7 of Andre Lotterer and Marcel Fassler, could only manage fourth quickest, as Lotterer failed to improve on his earlier time after taking back over the car from Fassler late in the session.

Toyota locked out the third row with its pair of TS050 Hybrids, neither of which seemed to have the pace when it mattered.

The title-contending #6 machine of Kamui Kobayashi and Mike Conway, who had a time deleted for a track limits violation, was fifth, 1.015s off the pace and half a second clear of the #5 car of Anthony Davidson and Kazuki Nakajima, who were also hobbled by having an early laptime deleted.

Rebellion Racing took LMP1 privateer pole in its last race in the division, as the ByKolles failed to set a time during qualifying.

LMP2 pole went to the #26 G-Drive Oreca of Rene Rast and Roman Rusinov, whose combined efforts produced an average of 1m49.672s.

That was 0.018s up on the #36 Signatech Alpine shared by Gustavo Menezes and Stephane Richelmi, while third place went to the best of the Manor Orecas, the #44 of Alex Lynn and Matt Rao.

In GTE-Pro, it was the #95 Aston Martin car of Darren Turner and Jonathan Adam that took pole position - with both drivers incredibly setting identical laptimes of 1m56.953s.

That gave the all-British duo a margin of 0.128s over the points-leading sister #95 car of Nicki Thiim and Marco Sorensen, who need to finish in third place on Saturday to be certain of the class title.

Ferrari supplied the closest opposition to Aston Martin, with the #51 car of Gianmaria Bruni and James Calado putting in an average time 0.427s off the pace, while the best of the Fords, the #67 of Harry Tincknell and Andy Priaulx, was fourth, a further half a second back.

Pole position for the #98 Aston Martin of Pedro Lamy and Paul Dalla Lana in GTE-Am ensures that the race for title honours in that class goes on, although the #83 AF Corse squad needs only to finish on Sunday to take the crown.

What Porsche needs to do to seal the WEC title

F1 could mix up tyre compounds to spice up double-headers