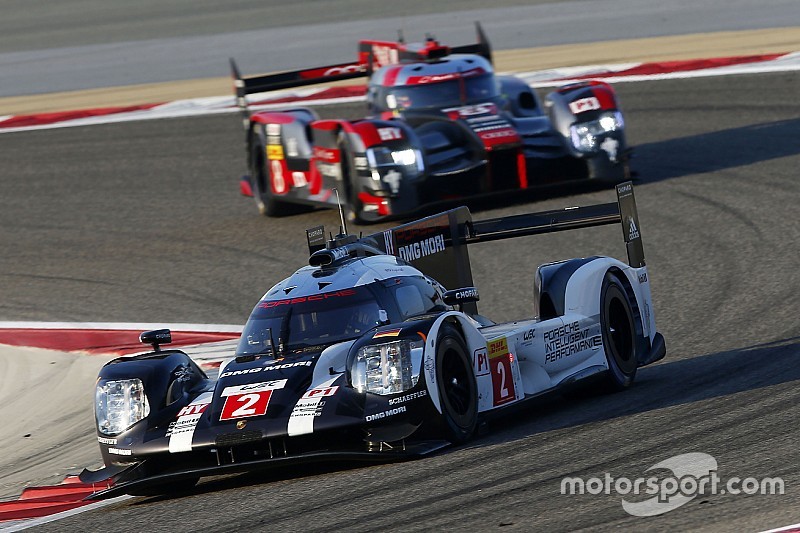 The FIA World Endurance Championship-leading Porsche 919 of Neel Jani, Romain Dumas and Marc Lieb again set the pace in second practice for the 6 Hours of Bahrain.

The car needs a top-five finish to clinch the title this weekend, and has now topped both sessions so far in the Middle Eastern island kingdom.

There was some bad news for #1, however, as it’s under investigation by stewards for not slowing down under a double-waved yellow flag.

The #8 Audi stayed third, two tenths ahead of the leading Toyota – the only car that can beat the #2 Porsche to the world title – of Mike Conway, Stephane Sarrazin and Kamui Kobayashi. Conway set the time of 1m40.603, well clear of Andre Lotterer’s 1m41.020s in the fifth-placed #7 Audi and the #5 Toyota, which managed 1m42.859s in Sebastian Buemi’s hands.

G-Drive led the LMP2 times throughout with Rene Rast and Alex Brundle setting consistently impressive times, a 1m50.056s being their quickest.

There was a 1-2 in GTE-Pro again for Aston Martin, with Marco Sorensen setting the fastest time of 1m57.226s in the points-leading #95, ahead of the #97 sister car's 1m57.594s in the hands of Darren Turner and Jonathan Adam.

The #67 Ford of Harry Tincknell and Andy Priaulx was best of the rest on 1m59.168s, ahead of the Ferraris of Sam Bird/Davide Rigon and Gianmaria Bruni/James Calado.

The GTE-Am class was also topped by Aston Martin, with the sole Vantage of Pedro Lamy, Mathias Lauda and Paul dalla Lana actually setting the sixth-fastest GT lap of the session overall.

There was a brief full-course yellow after half an hour to remove some debris at Turn 13, but the session ran incident free apart from track limits warnings, which were activated for this session unlike in FP1.