"We are aiming for a podium finish"

Andrea Belicchi and Mathias Beche secured the fifth fastest average laptime of 1:29.250 during the qualifying session for tomorrow's 6 Hours of Fuji, placing the #12 Lola-Toyota on the third row of the grid. 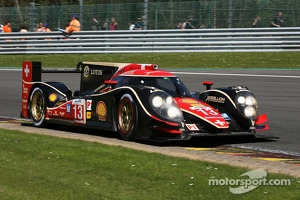 The fifth fastest lap in the qualifying session allows the REBELLION Racing team to record an additional «pole position» in the FIA Endurance LMP1 Team Trophy, the seventh in seven races this year (including the last Petit Le Mans 2013 pole secured a few hours ago at Road Atlanta – USA).

The only LMP1 team to competing two races at the same time in different parts of the world (Petit Le Mans – USA and 6 Hours of Fuji - Japan), the Swiss team aim to end the week securing strong results in both races. The start of the 6 hour race will be at 11:00 local time Fuji - Japan, Sunday 20th of October.

Andrea Belicchi : «This is my first race after my crash at Le Mans in June. I was a bit nervous starting the qualifying session because I was afraid about my ribs I broke in the crash. But I had a good feeling with the car. We did a good job with Mathias to improve the car. I'm happy to notice that we are 1 second faster than last year. We are ready for the race.»

Mathias Beche : « We had a good qualifying session. The team has done a good job. With no hybrid system, it's hard to fight with factory cars. Andrea did a good performance and I think we couldn't do better. For the race, we have to put ourselves in the condition to take advantage of any opportunity, especially if it is raining. Anyway, our goal is to look at the future and to prepare the team for next year. A finishing troublefree race would be a good reward in this way. We'll do our best to achieve a strong result here.»

Ian Smith – REBELLION Racing Team Manager : « As the only LMP1 Privateer entrant of the race, we are battleling against ourselves. Of course, we are aiming for a podium finish. To achieve this, we need to make no mistakes and be ready to take advantage of any opportunities. The trouble free pratices and qualifying give us confidence for the race. Andrea, Mathias and the team have all done a fantastic job this week and are highly motivated for the race.»

Audi on pole position for the fifth time, Japan now