Bernhard column: Porsche bows out in style in Bahrain 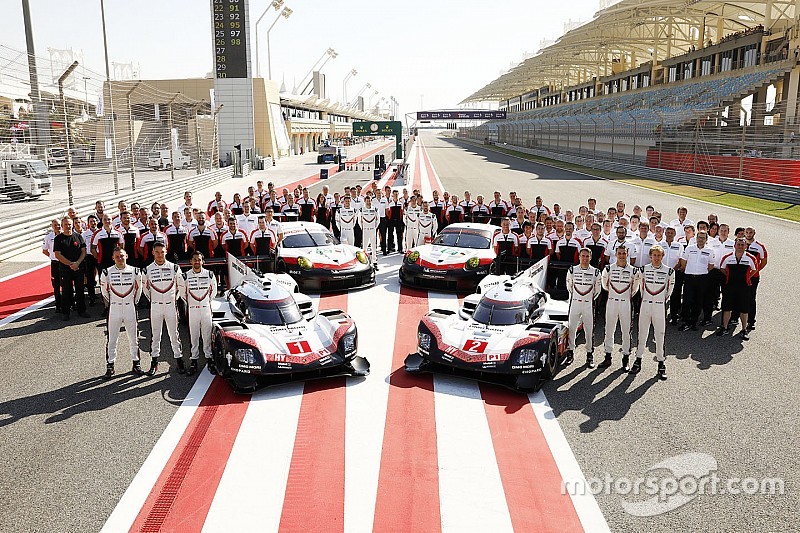 Porsche stalwart Timo Bernhard reflects on the end of an era for the German marque in last weekend's FIA World Endurance Championship finale in Bahrain, its last race in the LMP1 class.

One of the most successful chapters in Porsche’s motorsport history came to an end last weekend in Bahrain. It was a weekend full of emotions because a lot of memories popped up from when the LMP1 project first started.

It really fills me with pride to have been there from day one until the very last lap.

It was a great relief to have taken both titles in Shanghai already as there was no championship pressure in our last race. With a 20th pole in qualifying and a double podium in the race, we truly bowed out of an outstanding era in style.

Both 919 Hybrids had something special in the last race – every single team member’s name was on the car. Each success comes down to the hard work of each and everyone in a team and I thought it was a very nice gesture to have everyone mentioned on our cars.

The race in Bahrain was held on Saturday therefore we were on track on Thursday for free practice.

In the first session we were focusing on the race set-up. We started the second practice session with a qualifying simulation. Earl went on a long run after that to see for how many laps the tyres would last over the distance.

I did a qualifying simulation on used tyres in the third free practice session on Friday morning and topped the time sheets.

Qualifying didn’t run very smoothly for us. The balance was different to what we had in free practice and not 100 percent perfect. P3 seemed to be the maximum we could achieve.

Neel in our sister car posted an awesome lap and secured the 20th pole for Porsche.

It was very special for me to start the last ever race in the 919 Hybrid. The grid was really busy as many came to see the 919 get out for one last time.

Matthias Muller came to wish us luck and green-flagged the race. When the LMP1 programme first started, he was Chairman of the Executive Board of Porsche, so the last four years are also down to his courage.

His successor Oliver Blume was also at the race as well as Board Member for Research and Development Michael Steiner and Dr. Wolfgang Porsche. It felt like a great family reunion.

The passion for motorsport at Porsche is incredibly sincere and simply great. Of course there were a lot of nostalgic feelings ahead of the start, but I didn’t want it to get to me because we had a six-hour race ahead of us which required full focus.

I had a good start, got past one Toyota and kept up with Neel. Unfortunately someone ran over a bollard which rolled back onto the track. I was close behind Neel, saw it too late, couldn’t avoid it and ran over it.

The bollard got stuck underneath the car and I had to pit. The crew removed it and changed the nose. The extra stop dropped us far behind and we were out of contention.

It almost cost us one whole lap, but we dealt with it the same way we did with the set back at Le Mans this year: by never giving up! And that also paid off in Bahrain.

I handed over the car to Brendon in fourth. We moved up into third after the #7 Toyota had to be repaired following a collision and I took over from Earl for the last stint.

Our sister car was handed a stop-and-go penalty which meant that in the end we came second.

To drive the last few laps in the Porsche 919 Hybrid was very emotional and the race result almost became secondary. It was the end of a great era - not only for our Porsche LMP team but also for endurance racing overall.

We won’t see incredibly superior battles between different hybrid prototypes on such a high level anymore for the time being.

I can only say thank you for these amazing years. I will miss it all. The 919 programme definitely marks the highlight of my career. I look forward to what the future holds.