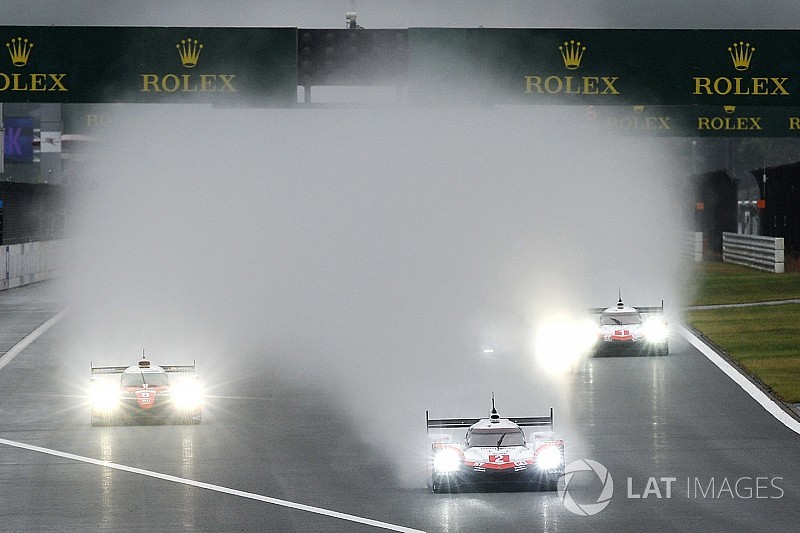 Porsche LMP1 ace Timo Bernhard reflects on a rain-soaked 6 Hours of Fuji in his latest column, a race that forced he and his teammates to put their FIA World Endurance Championship title celebrations on ice.

When it rains, it pours! The weather around Fuji is known to be quite unsettled during this time of the year and last weekend the heavens opened and it was chucking it down.

Persistent rain, interruptions and neutralisations affected the race, and in the end it was decided by the red flag, sadly without the outcome we'd hoped for.

The motorsport culture in Japan and the fans' expertise is amazing. You get to see the craziest fancy dresses, funny hats, colourful t-shirts and flags, and we also got some lovely handcrafted presents and banners.

Fuji itself is a challenging circuit that demands a lot of the car set-up, because you have to find a compromise for the track’s various requirements - for the 1.5km long straight you want the least possible drag but for the 16 curves you need enough downforce.

Sectors one and two are really fast. The start-finish-straight is the longest of the season and the downhill part after corner six also goes flat. But in sector three you have a series of narrow corners that are inter-connected. This sector is also the crucial one when it comes to tyre wear.

The first day on track was very challenging, and weather conditions didn’t really improve for Saturday. But the team made a few changes on both 919 Hybrids for qualifying, which worked out very well.

Earl and Brendon were on duty for qualifying and despite the difficult conditions they were able to use the car’s full potential. They both gave it their all and secured pole for us and an additional point for the championship.

If we had finished ahead of the Toyota, regardless in which position, we would have bagged the title, but things took a different turn.

The race was red-flagged after 39 laps and our car was the only LMP1 that hadn’t yet refuelled. It was a gamble as there was a good chance the race would not continue.

A twist in the race

However, just before 1pm the race continued behind the safety car and Earl had to come in for fuel, which meant we lost ground.

After I took over the car in fourth I had huge problems to get the tyres to work. I was driving in heavy traffic with lots of spray and very poor visibility. There wasn’t much I could do to heat the rubber up.

Then the leading #8 Toyota overtook me and the safety car came out. That was very unfortunate for us.

I handed the car over to Brendon and two laps later the safety car came in again. Through the course of the remaining race there were more yellow phases and in the end the race was red-flagged after 114 laps.

Brendon had no chance to unlap himself and was in the box for fuel when the race was stopped. We finished in fourth, while the #8 Toyota won the race.

It was a very difficult weekend for the whole team but everyone kept their head down and stayed focussed. With all the twists and turns everything was possible, and we have to congratulate Toyota for its 1-2.

We’re still leading both championships and we’ve got the next match point in Shanghai in a couple of weeks. The track should work well for us and we want to deliver a good race in pursuit of our title defence.