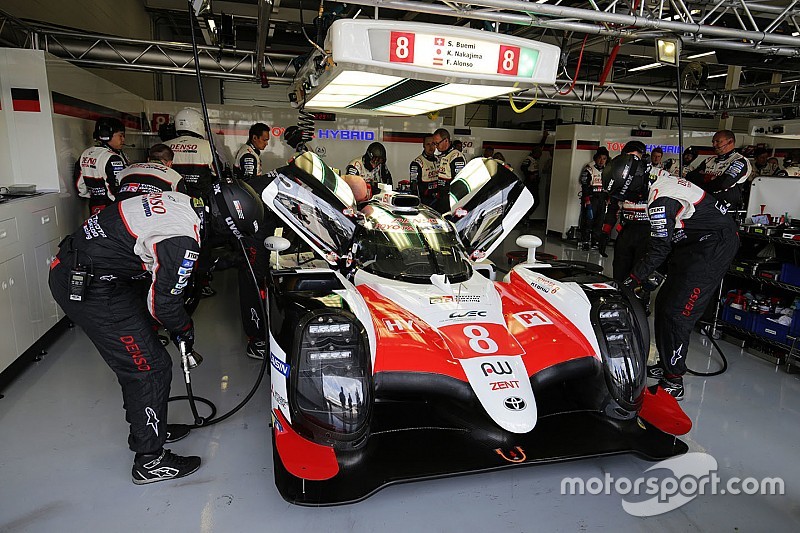 Both Toyotas have been excluded from the WEC 6 Hours of Silverstone, handing outright victory to privateer LMP1 squad Rebellion Racing.

The front part of the winning #8 car's skid block was reported to have "deflected 6mm on the right-hand side and 8mm on the left-hand side under the specified 2500 N load at the front of the skid block".

SMP Racing pair Stephane Sarrazin and Egor Orudzhev move up to the final place on the podium.

Stewards' bulletins relating to the exclusion of both Toyotas said the team had explained that both its cars sustained damage to their skid blocks in-race but that this was not deemed a valid excuse.

They read: "Although there are no reports of the car being involved in any specific incident, the competitor stated that his only explanation for the non-conformity must have been as a result of the car running off-track and sustaining some sort of damage to the internal stays that fix that portion of the car.

"The stewards considered this possibility but determined that the design of the car must be able to withstand the normal rigors of a 6 hours endurance race.”

The #3 Rebellion inherited what became victory as a result of the #1 car requiring a change of rear bodywork in the final hour in order to fix a faulty tail-light.

Following the news of the exclusion of both of its cars, a statement from Toyota read: "Both cars suffered damage to their respective front floor areas during the race due to impacts against the new kerbs at Silverstone. Regrettably, this also caused both cars to fail deflection tests in post-race scrutineering. As a result, race stewards disqualified both cars.

"The design and construction of the part concerned has not changed since its introduction at the beginning of the 2017 season. Since then it has successfully passed similar tests, most recently at Spa this season.

"The team is now evaluating its next course of action."