Calado and his teammate in the #51 Ferrari 488 GTE, Alessandro Pier Guidi, dropped out of contention for the 2018/19 GTE Pro title in a snow-affected Spa race earlier this month, despite finishing second behind the Aston Martin of Alex Lynn and Maxime Martin.

The Briton admitted the result was only possible because of the conditions and that in a fully dry race both the two AF Corse-run Ferraris would likely have finished last and second-to-last.

Unlike the other three cars in the class, both Ferrari and Aston Martin had their last BoP change made prior to last November's Shanghai race, with the current automated system designed to issue a new BoP if required every two races.

However, because both the Shanghai round and the Spa race were wet, the existing BoP will apply for Ferrari and Aston for one more short-distance WEC race - the 2019/20 opener at Silverstone - before another change occurs.

"Because Shanghai was wet, we didn’t get the change we hoped for," Calado told Motorsport.com. "[And because Spa was wet] we’ll go into next season with a slow car again.

"We’re at the maximum we can be, absolutely. There’s nothing more to give in terms of power from the engine, set-up… the only thing we can change is tyres really.

"The others have managed the BoP situation quite well, and they’ve improved their cars. Generally in WEC, we’ve seen a raising of the game, but I think Ferrari can see that happening and we have to do the same."

Calado reiterated concerns voiced by Ferrari stablemate Davide Rigon in the run-up to the Spa race, namely that a lack of straightline speed is not only making it hard for the 488 GTE to pass GTE Am class cars, but also placing a greater strain on its tyres.

He said: "If you look at top speed [in the speed traps] it’s 8 or 9km/h [difference], but in the middle of the straight, it’s probably 10 or 12km/h. And they can run more downforce.

"For BMW and Ford, they can just overtake on the straights, save the tyres. We have to brake later, slide, go over kerbs; it’s a knock-on effect of having poor straightline speed."

Calado is hopeful that the Le Mans 24 Hours won't be as difficult as it was for Ferrari last year, because the showpiece race falls outside of the usual auto-BoP system.

He said he believes the Prancing Horse can compete if the 488 GTE can be brought within 5km/h of the fastest car in the speed traps.

"We’re hoping it’s not going to be as bad as last year," he said. "We hope we get something for the poor performance last year. You never know, but I think we’re confident we can do well.

"We don’t know what the others are hiding or not hiding. The Fords and BMWs are stonkingly quick, I don’t know if they’ve any more to give; maybe that’s their maximum. All we need is straightline speed, to at least get us within 5km/h so that we can hang on."

The recently-revealed BoP for the Le Mans test day has given the 488 GTE a modest weight reduction as well as a small turbo boost increase. 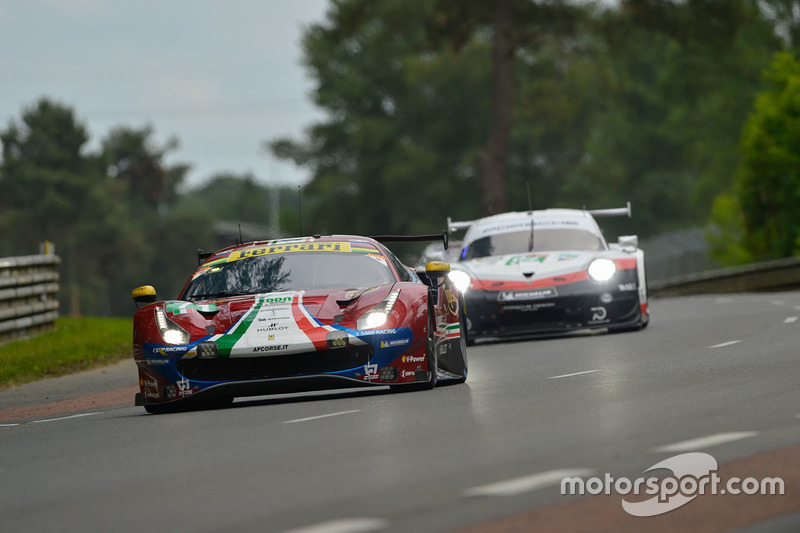