The #22 Oreca 07 of Paul di Resta, Filipe Albuquerque and Phil Hanson was unchallenged from pole position in the 8 Hours of Bahrain, comfortably beating Davidson, Antonio Felix da Costa and Roberto Gonzales in the #38 JOTA Sport-run Oreca.

United’s winning-margin was 21 seconds after eight hours of racing, but its lead peaked at nearly a minute in the first half of the race.

Davidson, whose JOTA team won last time out in Shanghai, believes the track-centric changes United made to its Oreca in Bahrain allowed it to dominate the weekend from start to finish.

“They were out of reach all weekend,” Davidson told Motorsport.com. “From FP1 onwards, untouchable. It was a bit like the TDS team were in Fuji when Nyck de Vries and [Racing Team Nederland] won that race by miles. It was same for United here.

“So they seem to unlock the potential in that car around this particular track. So it’s very competitive but it seems that one team gets it right they dominate.

“I wish it could be a little bit closer. It’s amazing that it’s not because they are all spec cars. We had that potential in Shanghai, but we couldn’t quite match that performance here.”

United’s victory in Bahrain moved it to second in the LMP2 standings, just three points behind the the #37 JOTA Sport-run car of Gabriel Aubry, Ho-Pin Tung and Will Stevens that runs under the Jackie Chan DC Racing banner.

Davidson lamented the incident at the start of the race that damaged the mandatory rear lights on his car, forcing him to pit for a change of bodywork.

“We tried very hard but we did the best we could but we had a bit of bad luck,” he explained. “I got hit at the start of the race from behind which I didn’t even feel, but it knocked out the left-rear light which meant we had to change our bodywork, cost us about 30 seconds and we lost the race by 21.5s seconds.

“I know everybody has an if and a but story, but that was our bad luck moment of the race. But in saying that, we didn’t quite have the pace today to win the race.

“United did a better job, they had a faster car. So yeah, congratulations to them. It wasn’t our track really. We couldn’t unlock any more speed from the car.” 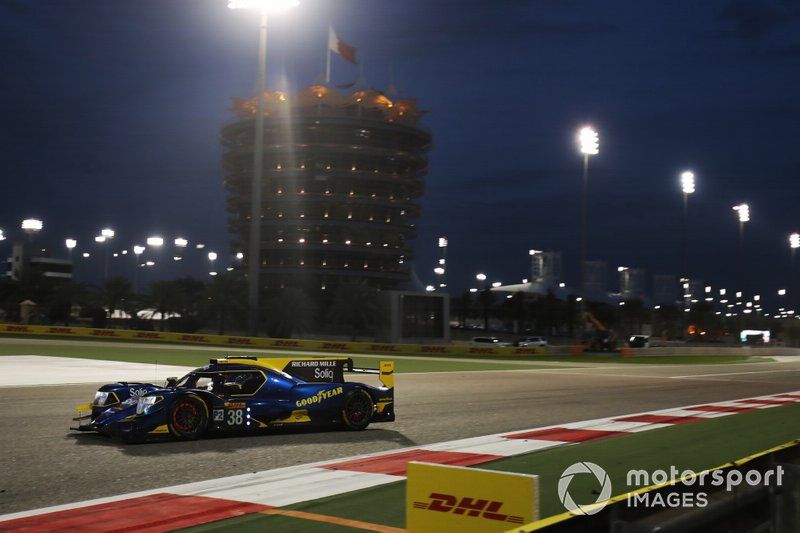 United switched to an Oreca chassis for its first full season in the WEC in 2019/20, having previously run the Ligier JS P217 in the European Le Mans Series, and finished on the podium in the last two races prior to its victory in Bahrain.

However, it has been hampered by electric failures in the opening two rounds at Silverstone and Fuji and a blocked air intake in Shanghai was something di Resta described as “very unfortunate” in the run-up to the weekend.

Albuquerque says he was pleased to see United “break through the spell” of misfortunes that had prevented the team from showing its potential in the early part of its campaign.

“It’s been quite a while since I won in WEC, but obviously I’m happy,” said Albuquerque, who won two races for RGR Sport by Morand in 2016.

“I think we were more tense than usual because we’d been having some unlucky electronic issues since the beginning of the season even if we had the pace.

“Leading the race, we had everything under control but we were always tense to see if anything could happen to take away the victory.

“But we had a massive gap and then I think the tyres of Goodyear are pretty good in the night and with the cold they were a little bit quicker.

“Then it came to strategy, saving fuel and me against my good friend Antonio [Felix da Costa], in the end it was nice to score victory and good get points, and break through this spell we were having.”