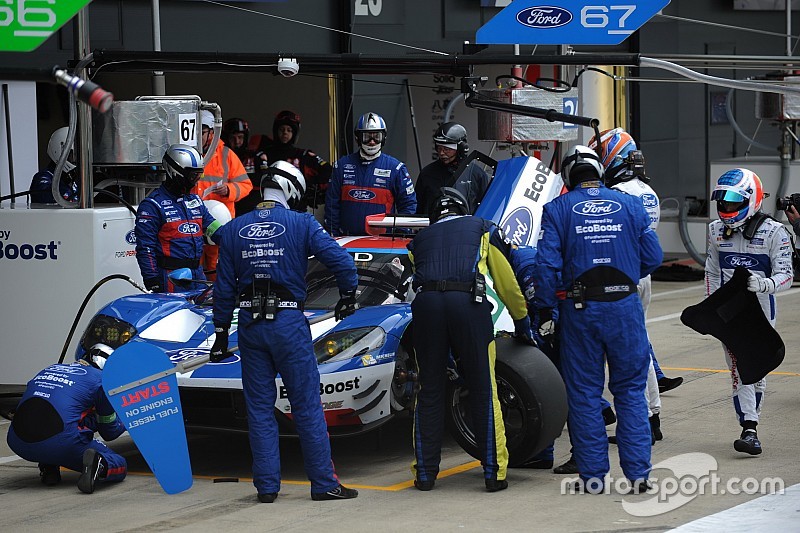 The #67 Ford of Andy Priaulx, Harry Tincknell and Pipo Derani and the #66 of Stefan Mucke, Olivier Pla and Billy Johnson started from pole and fourth on the grid respectively and finished there, too.

However, for much of the race, it appeared that the Mucke/Pla/Johnson trio would prevail, after a strong start, as its sister car had to make its first stop early due to the right-hand side door coming loose.

Despite a recurrence of the door problem in the closing stages, a late safety car period saw the polesitters gain a “free” stop and vault to the front once more, as their teammates lost a 30sec lead and fell to fourth once more.

George Howard-Chappell, team principal for the WEC arm of the Chip Ganassi Racing team, said: “That was a fabulous way to start the season. To come out fighting like this, to take pole position and win the race with the #67 car is just amazing and much more than we expected.

“It was a shame for the #66. They were in with a shout before they got messed about a bit with the safety car.

“I’m not going to complain though as it has been a great kick off to our season. I’m really happy with the work we’ve done over the winter on fine-tuning the car and with the great support we’ve had from Michelin with the tyres.”

Priaulx commented: “After the first stint we were looking down and out but we never gave up. In my second stint I kept my head down and pushed to the maximum.

“For sure the safety car helped us but you make your own luck in racing. Coming out when it did reset our race. It’s so good to be able to convert pole position to a win.”

“It wasn't an easy race for me,” said Derani. “Everything is new so I had to learn a lot of things, including the tire management, which on the GT is a little bit different than on a P2 car.

!It was a really good race and we didn’t expect to be here, especially after the beginning with the problem, but the guys did a fantastic job, the team was phenomenal and we will enjoy our win.”

Briton Tincknell, who took over from Derani, said: “I really enjoyed having such a long run and it was one of those times when it goes very quiet in the car and you really get into the zone. I was just nailing the laps one after the other and focusing on the checkered flag.

“To get the win at home, in front of family, friends and Ford employees is fantastic. I gave it absolutely everything I had today and I hope this sets us on the path to a championship win.”

A disappointed Mucke said: "The start of the race was actually really good for us. We managed to go from fourth to first before Andy got through for the lead again and then 10 laps later we were back into the lead.

“It's a real shame. Of course it is great for the whole team to win at the start of the season but for us it’s hard to lead for so long and then only finish fourth because of the safety car.

“It was out of our hands today and we will come back even stronger.”