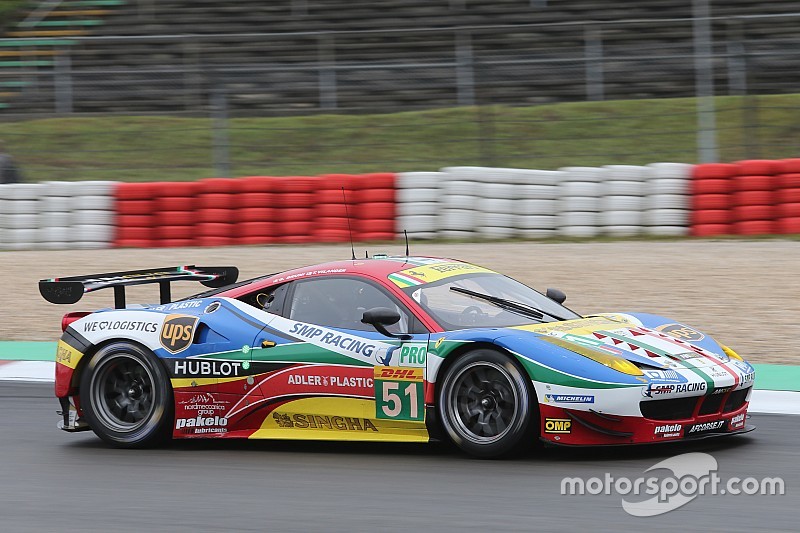 An all Ferrari front row in LMGTE-Pro class with AF Corse's 458 Italia no. 51 of Bruni-Vilander ahead of the no. 71 of teammates Rigon-Calado.

Nurburg – Ferrari enjoyed a good qualifying session at the 6 Hours of Nurburgring on Saturday afternoon. Maranello customer team cars monopolised the front row in the LMGTE-Pro class, while in the LMGTE-Am category SMP Racing's 458 Italia no. 72 claimed its first pole of the season. LMGTE-Pro. Ferrari will fill the entire front row in the

LMGTE-Pro class for the first time this season

Toni Vilander opened the qualifying in car no. 51, immediately clocking up a good time of 1:54.391. However, he was still beaten by two Aston Martins. Toni then handed the 458 Italia to teammate "Gimmi" Bruni who was faster (1:54.159) and, with the help of a series of Aston Martin driver errors, managed to clinch pole position in an average time of 1:54.275. The world champions will line up alongside teammates Davide Rigon and James Calado. The drivers of Ferrari no. 71 did well to be competitive again after a very difficult second free practice session.

In the wake of their triumph in the Le Mans 24 Hours, the crew of SMP Racing team's Ferrari 458 Italia no. 72 clinched their first pole of the season. Russians Viktor Shaytar and Aleksey Basov clocked up 1:56.528, ahead of Aston Martin no. 98 (Dalla Lana-Lamy-Lauda, 1:57.060). Andrea Bertolini opted not to drive, as he has done previously this year, so he will be able to drive in the final part of the race where he will use his 10 plus years of experience to try to achieve the best possible result.

The other Ferrari in this category, the AF Corse’s no. 83 in the hands of Francçois Perrodo, Emmanuel Collard and Rui Aguas, finished fourth in 1:57.246, behind Porsche no. 77 (Dempsey-Long- Seefried, 1:57.232). The 6 Hours of Nurburgring will start tomorrow at 13 CET.