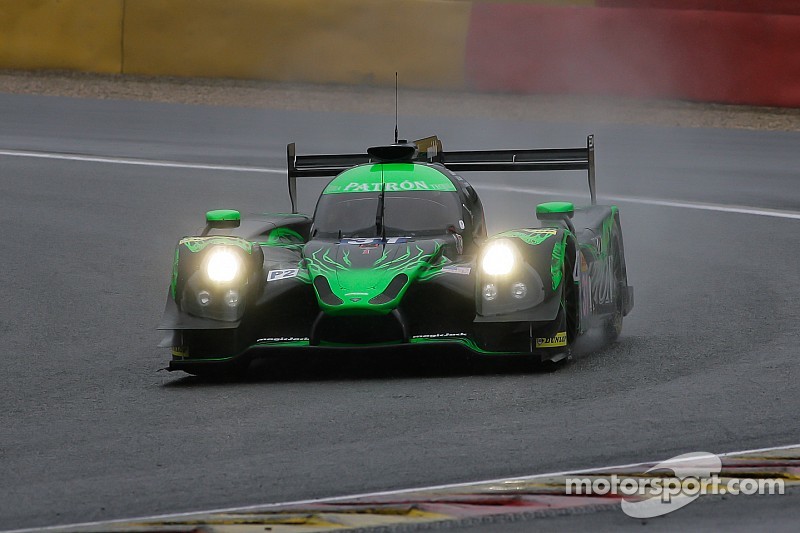 At the conclusion of the FIA WEC 6 Hours of Spa-Francorchamps endurance event, ESM was listed eighth and ninth in the LMP2 class.

Francorchamps, Belgium – It was a weekend filled with a litany of firsts for the championship-caliber Tequila Patrón ESM team and its first full-season of FIA World Endurance Championship (FIA WEC) competition - first time at the Spa-Francorchamps track for the team and some drivers, first run of new race cars as well as new tires. At the conclusion of the FIA WEC 6 Hours of Spa-Francorchamps endurance event, Tequila Patrón ESM was listed eighth and ninth in the LMP2 class, but the team showed determination, speed and podium potential.

Tequila Patrón ESM received two Ligier JS P2 race cars on Monday, so the six-hour event a mere five days later acted as an extended test session for the combination of new cars, Honda HR28TT V6 engines and Dunlop tires at a racing venue that four of the six drivers have never visited.

On Friday’s qualifying session, the team earned seventh and ninth starting positions on the LMP2 grid. An LMP2 competitor car failed post-qualifying technical inspection which resulted in both of the Tequila Patrón Ligier JS P2s advancing by one position. The No. 30 moved to sixth and the No. 31 started eighth.

Now we have the biggest race of the year ahead of us and we have some work to do.

During today’s race, the team experienced a series of minor teething issues with the Ligier JS P2 machines. Early on, Ryan Dalziel, co-driver of the No. 30 Tequila Patrón ESM Ligier JS P2 Honda, had broken a boost line. He pitted and the team replaced the damaged line. The repair dropped the No. 30 to the bottom of the LMP2 class. Looking to maximize track time and learn more about the Ligier JS P2, the No. 30 team charged ahead. Dalziel completed his stint and David Heinemeier Hansson was second to drive.

The No. 30 Tequila Patrón ESM crew and engineers made adjustments to the race car throughout Dalziel’s stint and found a combination that enabled Heinemeier Hansson to run similar pace as the leaders. Unfortunately, at 20 laps down, the team was unable to challenge for a podium.

Scott Sharp completed the race for the No. 30 team and followed in Heinemeier Hansson’s race shoes by logging laps on pace with the LMP2 leaders.

For the No. 31 car, in his first race WEC race of 2015, Johannes van Overbeek found a steady pace in his opening stint. He completed his laps improving with each pass before pitting for the scheduled driver change to Ed Brown.

Brown had a consistent pace for his first race at the challenging circuit and worked on his race craft, continuing his development and understanding of the new race car, engine and tire combination. After Brown's stint, Jon Fogarty began his time behind the wheel of the No. 31.

The first part of Fogarty’s stint was issue-free. Midway through his stint, Fogarty started to have issues with boost. He pitted and the team brought the No. 31 to the garage for inspection and repair. The team replaced a broken boost line, the same part that was replaced on the sister No. 30, and Fogarty returned to the circuit. With less than an hour to go, van Overbeek returned to the cockpit and completed the race.

Tequila Patrón ESM expected a challenging race weekend at the FIA 6 Hours of Spa-Francorchamps. The race in Belgium is often considered a preview and test to the 24 Hours of Le Mans. The team leveraged every minute of the track time today to ensure new car teething issues were identified and resolved before heading to France next month.

Scott Sharp: “We got some dry running in today. We have a long way to go to get our hands around the car. Now we have the biggest race of the year ahead of us and we have some work to do. We needed to get some dry and long runs in, which we were able to get. Due to our early issue we were able to try some different things on the car. I think we learned a lot and made it better. We’ll go back, review all the data and notes and come up with a better game plan for the Le Mans test.”

Ed Brown: “We had the cars delivered on Monday and then the rain Thursday on track here; we needed to have realistic expectations today. I think it worked out pretty much how we wanted it to. We had a couple of mechanical glitches and we need to figure out the cause. We felt if all the drivers could leave Spa with a good comfort level of the car, we won. I think we did that. All of us have really high hopes for this car and we need to continue to get used to it; it is a fantastic car. It is going to be fun at Le Mans to really see what this car can do.”

Ryan Dalziel: “We had a bit of an issue with the boost line and it forced our hand to turn the race into a test session, which had huge benefits. We made some pretty big gains on the No. 30 car. We found a good direction and pace in the car. In the middle to two-thirds of the race, we were running the same pace as the leaders. We would have loved to go back to Thursday and have three hours of dry running. It just wasn’t meant to be with the weather. It was a difficult weekend which we expected, but I think it was a Patrón worthy effort from everybody. This is a good set-up for Le Mans. We’re super happy to have the Ligiers with HPD engines.”

Johannes Van Overbeek: “The first stint was just getting acclimated and the second stint was really fun. I felt like I could really push and challenge the car and track. The car is great; we have some tuning to do on it, but I’m really glad we had the opportunity to run this package before Le Mans. The car likes to be driven aggressively, which I like, and it brakes well. The only issues we have are things that we need to tune for our liking, but it is a fantastic car. My hat is off to Tequila Patrón ESM and Onroak for delivering this car to us because a week ago, it was in pieces.”

Jon Fogarty: “We had a broken boost line during my stint but the Honda guys were able to identify and get it fixed. It seems wrong to have a smile on my face with the cars finishing eighth and ninth. It was great to get some laps around here and get comfortable with the car and start to figure out what potentially lies ahead. The car is awesome. I was finally able to get comfortable with the track, which allowed me to push the limits of the car and from there we can start developing. It was good to get the development work done here this weekend because you don’t want to be testing at Le Mans. We’re still a little behind the eight ball, but we’ve made steps forward. I think it was good to have the opportunity to get a long run, push the limits of the car and get it to go faster.”

David Heinemeier Hansson: “I had a great run with the car. I think Ryan had the tough job of sorting it all out and when I got into the car, it was better. We made another change midway through my run that improved the car even more. The first half of my stint, the car was solid. A big part of it was that we haven’t run this car and it requires a different technique than the 03b did. I felt like I got the hang of the technique of charging into the corner aggressively, which that was the best way for me to extract the best lap out of the car. I’m happy with how the car was. I wish the ending car was the car we started with, if that was so, we could have fought for the podium. But a podium isn’t as important as getting the car ready for Le Mans. That’s the big show and you want to be sure you are ready. I feel we are much closer now than we were at the beginning of the weekend.”