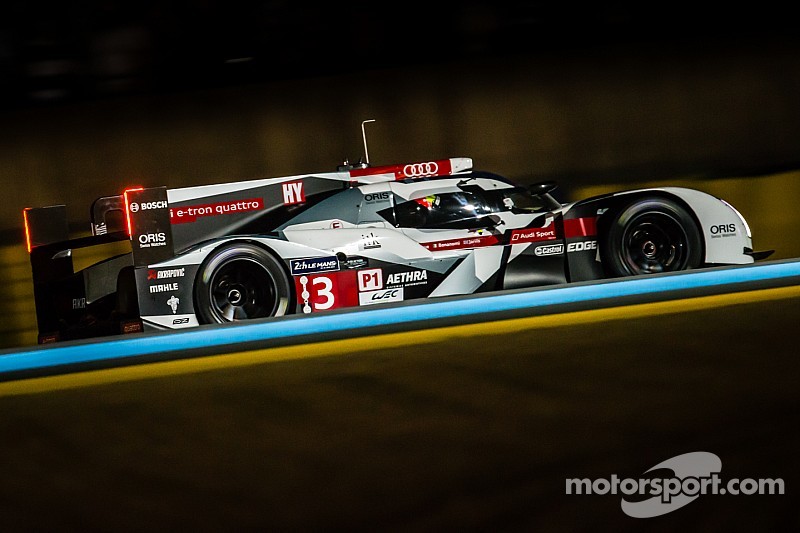 Audi has traditionally been offering selected talents an opportunity to prove themselves at the wheel of the third R18 e-tron quattro.

Ingolstadt – The third R18 e-tron quattro that is additionally fielded in two rounds of the FIA World Endurance Championship (WEC) is a ‘dream cockpit’ for many race drivers. Audi has traditionally been offering selected talents an opportunity to prove themselves at the wheel of this car. Be it Mike Rockenfeller, who was in the cockpit of the third LMP race car for the first time in 2007 and, three years later, celebrated overall victory at Le Mans with Audi, Loïc Duval, Lucas di Grassi or Oliver Jarvis, all of them have since been promoted to regular cockpits – so the third car is practically a career springboard.

This year, Filipe Albuquerque (P), Marco Bonanomi (I) and René Rast (D) are forming the team of car number ‘9.’ Although they will be competing in this line-up in the Spa 6 Hours on May 2 for the first time, the three young race drivers have known each other for some time. Albuquerque and Bonanomi contested the rounds of the FIA World Endurance Championship (WEC) at Spa and at Le Mans together last year. In addition, the two Southern Europeans have jointly celebrated success in Audi’s GT team Sport Italia.

In 2010, they clinched the runner-up’s spot in the Italian GT Championship in the Audi R8 LMS. A year later, Bonanomi won the GT Championship in his home country with Albuquerque as his team-mate in some of the races. René Rast has been involved in various Audi GT programs since 2009. As a result, the members of this trio keep meeting each other at individual races.

While Bonanomi joined Audi’s LMP test driver line-up in 2011, Albuquerque switched from the DTM to the brand’s sports car program last year and has been on the Le Mans grid once so far. “I’m really excited about continuing to develop my driving potential in sports prototypes – it’s a fascinating race car category,” says the Portuguese, and Marco Bonanomi adds: “Racing together in this project with Filipe, whom I’ve known for a long time, is great fun and René perfectly fits in with our team as a driver and as a person.”

René Rast is the youngest newcomer to the LMP squad. The German competed at Le Mans last year with a privateer team and got to know the Audi R18 e-tron quattro in tests this year. “I’m looking forward to this challenge. Audi’s giving me an opportunity that I’m sure is something any young race driver would be dreaming to get,” says Rast, a winner of last year’s 24-hour races at the Nürburgring and at Spa. “I get along really well with Filipe and Marco. It’s great to form a team with them.”

“We’re convinced that, in addition to our regular drivers, we’ve found a well-matched driver combination for number ‘9’ too,” says Head of Audi Motorsport Dr. Wolfgang Ullrich. “As a result, we’ll be traveling to Le Mans with a strong and well-balanced squad. In this race, we’ve seen more than once that a solid team performance is equally crucial as technology, strategy or pure speed.”