From summer hot to Silverstone's rain for Ruberti

After more than two months of break, FIA WEC will resume from Silverstone (GBR) with the fourth round of the season, that is going to be the last in Europe before the Intercontinental exits to Brazil, Bahrain, Japan and China.

Paolo Ruberti and his team mates Gianluca Roda and Christian Ried is ready to defend again the colors of Porsche in class GTE AM, where team Felbermayr-Proton is currently holding the third place of the classification with 50 points, that is 36 shy of the top. 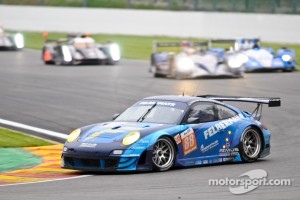 As tradition, weather conditions will be one of the main unknown on the fast British track: rain and thunderstorms are forecast for Friday and Saturday, while precipitations should be less intense on Sunday. This situation does not worry the Italian driver though as he has run some of his best races on the wet.

Paolo Ruberti: "Our season in FIA WEC started in the best possible way in Sebring and Spa, while in Le Mans things did not go as expected and the retirement forced us to temporary give away the classification lead. After the summer break the title fight resumes from Silverstone and we are hopeful to be in place to play at best our cards in GTE AM even if our team will have just a lineup in this series as the other will be competing in GTE PRO. The classification will consider the best result therefore it is going to be particularly important to finish within points".