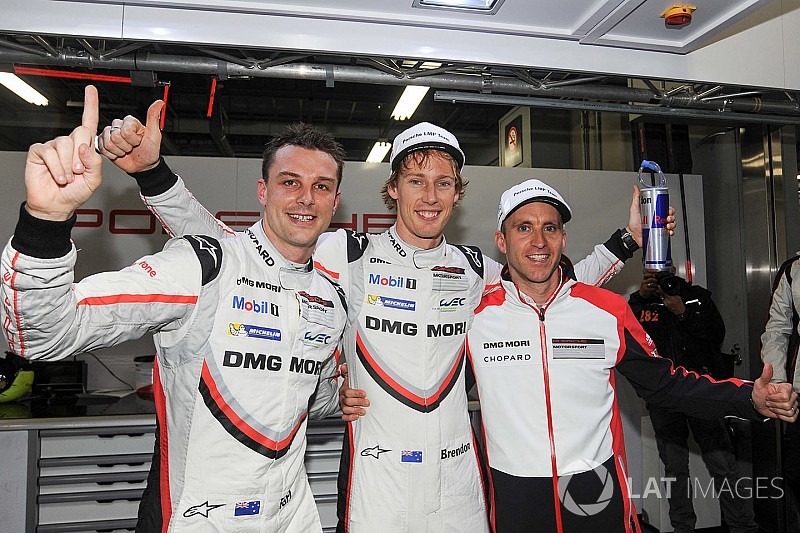 Bamber trailed teammate Nick Tandy after the first runs during the wet qualifying session by less than two tenths of a second.

Hartley went quicker than Andre Lotterer to jump ahead of the #1 Porsche 919 Hybrid, before the German improved his time to claim back the top spot.

The New Zealander, who leads the WEC standings with Bamber and Timo Bernhard, responded to propel the #2 car back to the top of the timesheets.

Toyota was less than two tenths of a second behind with the #8 TS050 Hybrid qualified by Kazuki Nakajima and Sebastien Buemi.

Nakajima had trailed Tandy's session-best of 1m35.068s by almost exactly two tenths, before Buemi whittled his time down to a 1m34.441s to run the Porsches close.

Jose Maria Lopez and Kamui Kobayashi were over a second back on their teammates in fourth position in the #7 Toyota.

Hartley said: "That was seriously close between the two Porsches, and Buemi at the end there was on fast lap.

"The Toyota look strong on the long runs, so we are expecting a close race tomorrow."

Piquet Jr headed teammate Bruno Senna by three tenths after the first runs, and then Heinemeier Hansson had more than a second in hand over Julien Canal in the sister Oreca-Gibson 07.

Ho-Pin Tung and Thomas Laurent were less than a tenth back in third aboard the lead Jackie Chan DC Racing Oreca.

Porsche took the pole in GTE Pro, Richard Lietz and Frederic Makowiecki taking the top spot with a 1m47.533s average.

That put them four tenths up on the Ganassi Ford GT driven by Andy Priaulx and Harry Tincknell.