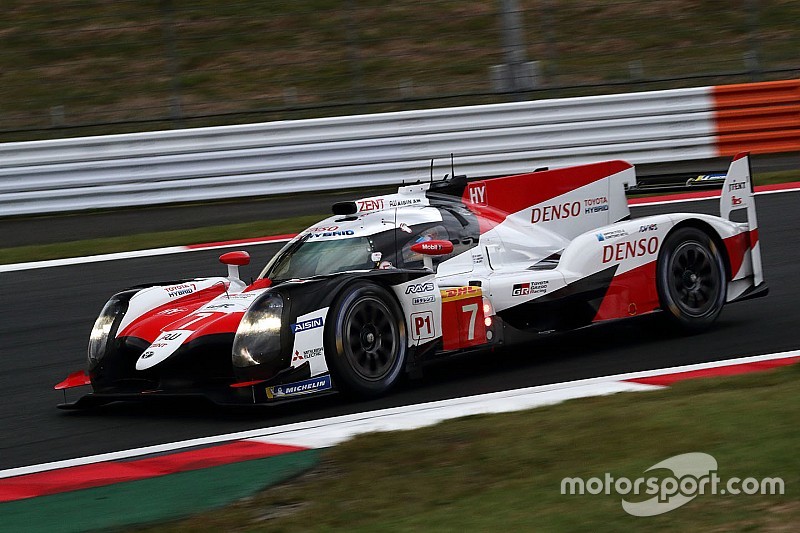 Toyota retained a comfortable advantage over its LMP1 opposition in final practice for the WEC 6 Hours of Fuji, with Kamui Kobayashi setting the quickest time.

Following the disruption to Friday's running, which was marred by three red flags due to kerbs coming loose, Saturday morning's session was extended by 30 minutes.

Fernando Alonso held the upper hand in the #8 Toyota TS050 Hybrid initially with a time of 1m25.180s, but when Kobayashi took over the #7 Toyota he set what proved to be the quickest lap of the session, a 1m24.589s.

Alonso's FP2 benchmark of 1m23.973s remains the quickest time of the weekend so far, however.

SMP Racing regained its mantle of top privateer thanks to a late time of 1m25.675s from Egor Orudzhev in the #17 BR Engineering BR1-AER - a little over a second off the pace set by Toyota.

That was enough to beat the best of the Rebellion R-13-Gibsons, the #1 car of Neel Jani, by four tenths.

The Silverstone-winning #3 Rebellion occupied third for much of the session, but ended up fifth with Gustavo Menezes just four hundredths behind squadmate Jani.

Jenson Button set the #11 SMP BR1's best time, which was only good enough for sixth, ahead of DragonSpeed's customer Gibson-powered BR1.

The ByKolles ENSO CLM P1/01-Nissan was eighth and last of the LMP1s, James Rossiter's best time coming in more than a second adrift of the DragonSpeed BR1.

Jackie Chan DC Racing led the way in LMP2 thanks to a 1m29.352s effort by Jazeman Jaafar in the #37 Oreca, the quickest time of the weekend so far in the secondary class.

Friday pacesetter TDS Racing was second with Matthieu Vaxiviere at the wheel of the #28 Oreca, followed by the second Jota Sport-run Jackie Chan car, the #38 of Stephane Richelmi.

Best of the rest was the #66 Ford GT of Harry Tincknell, just under two tenths behind, while the lead entries from Aston Martin (Marco Sorensen), Ferrari (Davide Rigon) and BMW (Tom Blomqvist) filled out the rest of the top five.

GTE Am was likewise topped by Porsche, with Ben Barker's benchmark time of 1m37.709s putting the #86 Gulf Racing car ahead of the two slowest GTE Pro cars overall.

The session was red-flagged just as the chequered flag was about to fall when the #90 TF Sport Aston Martin's fire extinguisher went off and came to a halt while Charlie Eastwood was at the wheel.

That was the only stoppage of an otherwise virtually incident-free session.