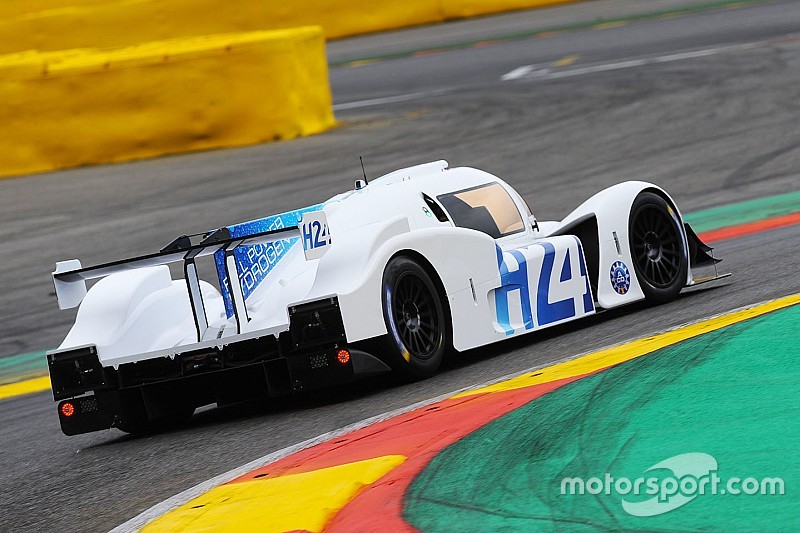 The Swiss group behind the car, which was demonstrated at the Spa European Le Mans Series round in September last year, has expanded its partnership with Le Mans 24 Hours organiser the Automobile Club de l'Ouest to create H24Racing, an initiative designed to take the car into competition.

The ACO, which initially supported the project under the MissionH24 banner, regards the LMP3-based car as an important stepping-stone towards the introduction of a zero-emissions class for hydrogen-powered cars at Le Mans in 2024.

GreenGT president Christophe Ricard told Motorsport.com that the ambition of his group was to race this year.

"The idea is to have our prototype racing soon; we hope and think it can be this year," he said. "But we cannot say where and when, because it all depends on the homologation of the car.

"There are no safety issues, but fuel-cell technology is new to everyone, so it is to be expected that this process will take some time."

ACO sporting director Vincent Beaumesnil explained that the intent of the H24Racing initiative was to have the car racing in one of the series under Le Mans organiser's umbrella as soon as possible.

"It is important to bring this technology into competition on the race track as we prepare for the future and 2024," he said.

"We have the possibility to have a Garage 56-type experimental entry in all our series and we are looking for the best option."

Beaumesnil suggested that the Michelin Le Mans Cup, the ELMS support series open to LMP3 and GT3 machinery, "could be a good place for the car to start racing".

But he stressed that no decisions had been made and no timeline laid down because of the complexities of technology involved.

"There is a very serious and detailed process to undertake to have the car, all the safety components and the refuelling equipment approved for racing," he said.

"We have to take this programme step by step."

Beaumesnil didn't rule out H24Racing competing in the 24 Hours at Le Mans ahead of 2024 as part of the data-gathering exercise for the new class.

"A Garage 56 entry at Le Mans could potentially be a step in the process, but it will not be this year," he said.

The GreenGT LMP2HG is based on an ADESS 03 LMP3 car modified to take an 650bhp hydrogen fuel-cell powerplant, which can be boosted by up to 335bhp by an energy-retrieval system.

The car began testing last summer and was then demonstrated by four-time Le Mans winner and ACO consultant Yannick Dalmas at Spa.

GreenGT's first hydrogen-powered prototype, the H2 based on a chassis built by Welter Racing, had been slated for a Garage 56 entry as early as 2013.

The car finally made it onto the full Le Mans circuit during the week of the 24 Hours in 2016 when it was demonstrated by Olivier Panis.

Hartley: LMP1 was "high on priority list" after F1 exit