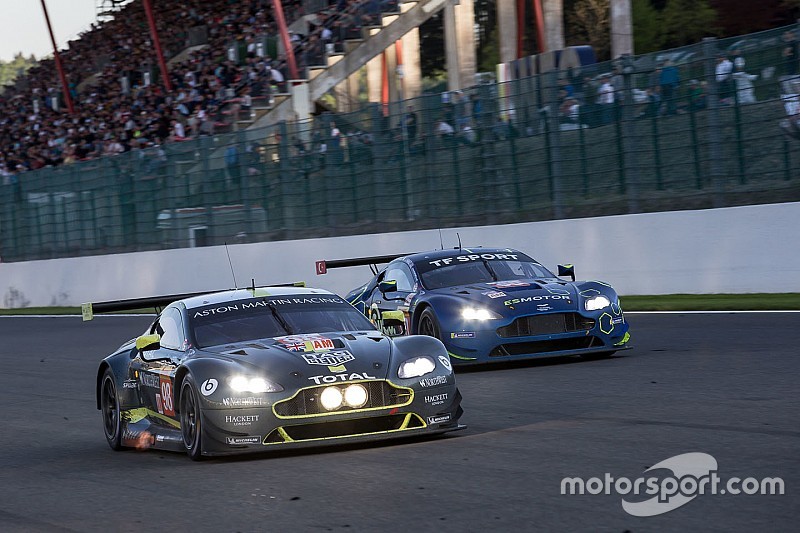 A late safety car for Matevos Isaakyan's Eau Rouge crash allowed Hankey to close in on Lamy's works Vantage at the start of the final hour, with the pair running nose-to-tail for much of the last 30 minutes.

But Lamy held on to win in the car he shares with Paul Dalla Lana and Mathias Lauda after holding off an attack by Hankey at the Bus Stop chicane.

"I knew with the safety car we were back in the game," Hankey told Motorsport.com. "He had a seven-second lead and I went for it, probably took a bit too much out of my tyres.

"I realised he kept braking early at the last corner, so I knew if I could hold on to him through the high-speed stuff, I could go for it at the Bus Stop.

"I went for it, he closed the door at the last minute, so I had to avoid him. In hindsight I should have rolled into him and pushed him off, but I was a little bit nice and respectful.

"That was it. He pushed me wide, I got a load of crap on my tyres, then he got another gap.

"On the last lap, I tried to go round the outside at Brussels [Rivage], I almost smashed in the back of a Ferrari. I couldn’t go right because he was there, [I lost out by] two tenths at the end."

Lamy commented: "It was really close. The other Aston was really fast, they had new tyres, I didn’t!

"With the traffic I was a bit faster, and then it’s easy to be in front because in the fast corners the guy behind cannot try to overtake because you open quite a bit of a gap."

Hankey added that TF Sport's result was all the more remarkable given the speed of the GTE Am Porsches, which had dominated up until the race - when all four 911 RSRs encountered problems.

"The boys did a great job, considering the Porsches are ridiculously fast," he said. "Their Balance of Performance needs to be changed for sure."