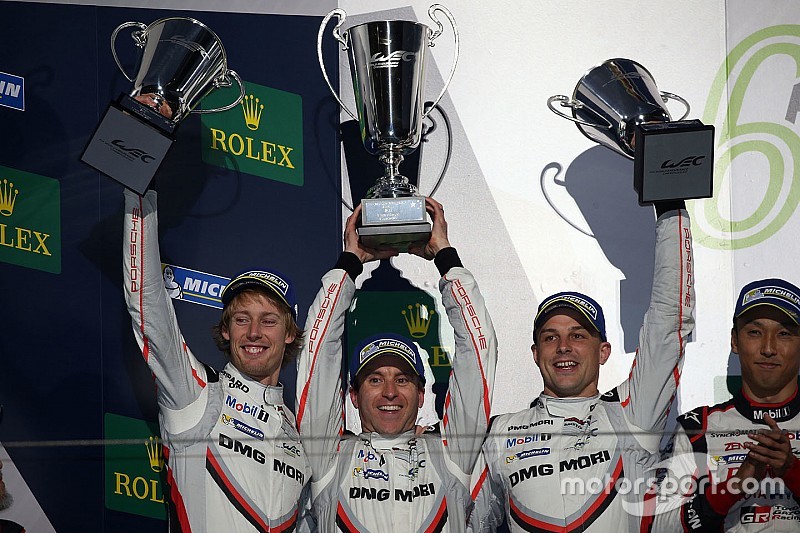 The New Zealander secured his second WEC drivers title in three years with a round to spare by finishing second in last weekend's Shanghai race alongside teammates Timo Bernhard and Earl Bamber.

Porsche likewise wrapped up the manufacturers' crown for the third year in a row in the final year of its LMP1 programme, having announced its impending exit earlier this year.

Bamber described the adoption of the high-downforce aerokit from July's Nurburgring round as the "turning point" in Porsche's season, a sentiment echoed by compatriot Hartley.

"I think it hasn't fully sunk in yet, it's been quite a busy few weeks for me," said Hartley, who returns to his F1 duties in Brazil this weekend following his first two grand prix starts in Austin and Mexico City.

"But to share a second world championship with Timo, and a first with Earl, who I grew up racing with, it's an incredible story, amazing to finish it off here and be world champions again.

"Big thanks to Porsche, like Earl said they really stepped it up after Le Mans."

Bernhard added: "It was incredible how hard everybody fought to make that happen after Le Mans to bring the car back pace-wise, and to go on the winning streak we had.

"It was amazing and they turned the season around."

Porsche LMP1 team boss Andreas Seidl described clinching both WEC titles in the final season for the programme as a "big release".

"It's a sensational story to win all these titles and races three years in a row," he said. "It was a big release today, not just for me but the whole team, that we could seal the two championships one race before the end.

"It's not been an easy situation the last month, especially with the announcement that we will stop at the end of the season, to keep everyone focussed and keep it up.

"At the same time with this points gap we were building up, you only see what can go wrong and you don't see your strength. So really happy that it worked out today.

"We were striking back big-time after Le Mans and it paid off."