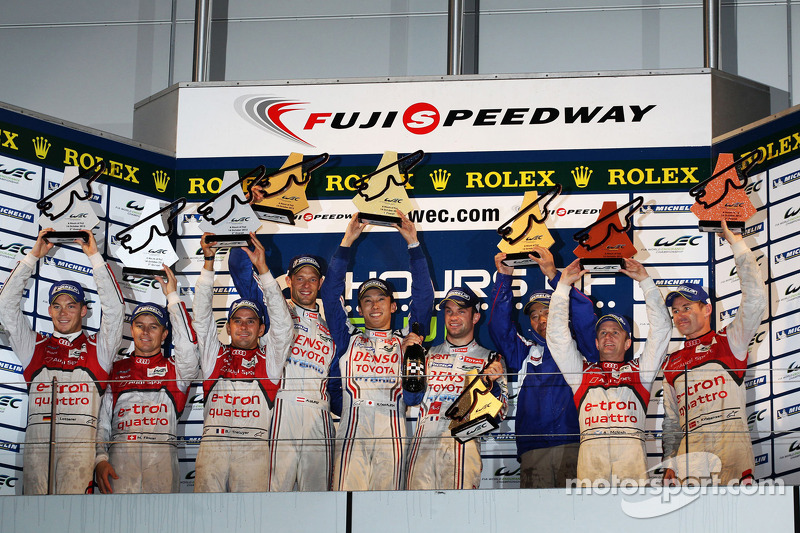 As daylight faded over the mountain peaks which surround Fuji International Speedway Toyota Racing’s Kazuki Nakajima took the chequered flag in front of a grandstand wholly given over to the Japanese manufacturer.

The huge 32,000 strong crowd (50,000 over the weekend) also saw victory for Toyota in the LMP1 Privateers Class as Rebellion Racing lifted the FIA Endurance Trophy for that class. 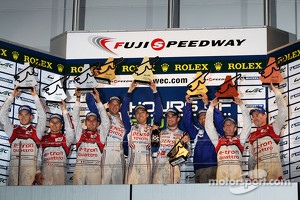 There was also victory for Nissan and Honda in the LMP2 class with victory for ADR Delta (Nissan) and Starworks Motorsports (Honda) wrapping up the LMP2 Team title. The 6 Hours of Fuji will no doubt linger in the Japanese fans’ memories for some time!

While Audi has already wrapped up the Constructors’ title, Toyota could be relied on to take the fight to the Four Rings in this latter part of the season.

After its first victory in the 6 Hours of São Paulo, the No.7 TS030 Hybrid shone on home ground thanks to Nicolas Lapierre, Alex Wurz and Kazuki Nakajima who were fast on each of the three days of the event.

The Japanese manufacturer took its second win in only its fifth race, an enviable statistic especially as the successes were achieved against a far more experienced adversary.

The battle was close right to the end with a gap at the finish line of just 11 seconds between the winning Toyota and the No.1 Audi R18 e-tron quattro of double 24 Hours of Le Mans victors André Lotterer, Marcel Fässler and Benoît Tréluyer.

This trio, having been awarded a penalty for contact with the No.97 Aston Martin, had to make one more stop than planned and lost the fuel consumption advantage it held over its Japanese rival.

Their second place wasn’t enough to allow them to take the Drivers’ title as the second Audi, the No.2 of Allan McNish and Tom Kristensen, also finished on the overall podium, having not been able to maintain the same rhythm as the top two cars after the first hour.

If the final outcome between the factory teams was tiny in terms of the gap, the race amongst the LMP1 Privateers was quickly settled.

The No.12 Rebellion Racing Lola-Toyota finished a lap ahead of its nearest rival, which allowed the British-based Swiss team to lift the FIA Endurance Trophy in the category one race before the end of the 2012 season.

Neel Jani and Nicolas Prost were never headed in the race, leaving the other protagonists to battle it out for second place which eventually went to the No.22 JRM HPD-Honda.

Just as Rebellion Racing succeeded in getting its hands on the FIA Endurance Trophy in its category, so also did Starworks Motorsport in LMP2 thanks to the second place finish of Stéphane Sarrazin, Ryan Dalziel and Enzo Potolicchio at the wheel of the No.44 HPD ARX 03b-Honda.

The trio, who were invincible at Sebring, Le Mans and Brazil, couldn’t match the No.25 ADR Delta Oreca 03 Nissan of John Martin, Tor Graves and Japanese driver Shinji Nakano, winners of the LMP2 class by a comfortable margin of one lap.

The Starworks car managed to stay ahead of the No.24 OAK Racing Morgan Nissan, Jacques Nicolet, Olivier Pla and Matthieu Lahaye climbing onto the third step of the podium for the second consecutive time following the 6 Hours of Bahrain.

Victory for Porsche and Corvette in Japan