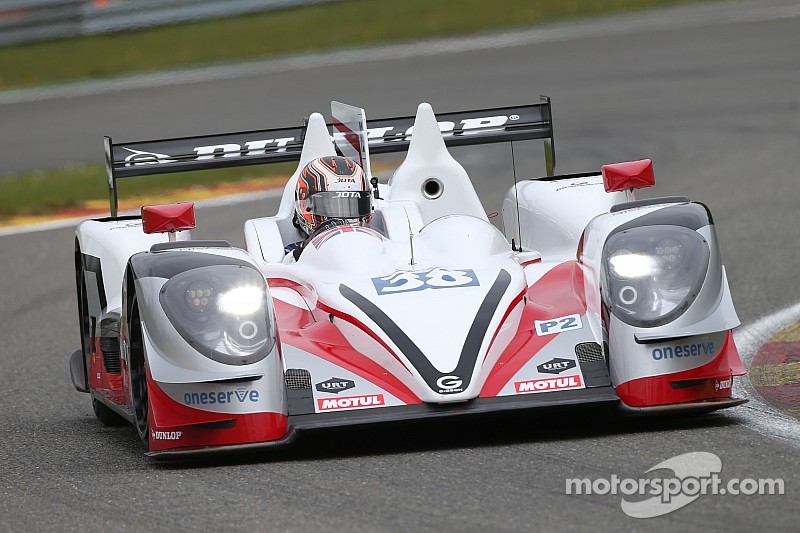 The British team’s latest achievement marks JOTA’s fourth consecutive “podium” in the corresponding race and second LM P2 victory since 2012 at Spa. The result also meant JOTA importantly completed a successful dress rehearsal for the upcoming Le Mans 24 Hours – a race next month in which the team aims for a second successive class win.

We came to the WEC race and smashed it!

Tincknell started the Gibson from the third-row of the LM P2 grid, the efforts of himself and Dolan having set the combined fifth fastest time in the 10-car LM P2 field in qualifying around the majestic 4.352-mile Spa circuit the previous day. Harry led the LM P2 field at the end of the second lap but race officials deemed Tincknell had made a “jump” start necessitating a drive through penalty. He resumed 22secs down on the class leader in seventh place but had battled superbly back into second place by the time he pitted to Evans on 90mins.

Evans, enjoying a brilliant JOTA Sport and sportscar race debut, swept the Gibson in to the LM P2 lead approaching one-third distance – a lead the British team would not relinquish – and pitted to Dolan shortly after mid-distance with a healthy 88secs advantage. Leader Dolan pitted for fuel with a little over two hours to run, Simon 38secs ahead of the second placed car.

Tincknell took over from “sportsman” driver Dolan, who had driven a strong and clean double stint, with 90mins remaining. Harry had a 28secs lead before the second-placed car suffered a mechanical issue and with an hour remaining, enjoyed a 93secs advantage. The JOTA Gibson made its final pit-stop with 40mins still on the clock, Evans coasting to the chequered flag.

The team will announce this week who partners Dolan and Evans at Le Mans (13-14 June). Tincknell is unavailable for the annual French “marathon” due to his Nissan NISMO LM P1 WEC programme which begins at Le Mans. JOTA Sport’s next race is the second round of the European Le Mans Series at Imola on 17 May.

Simon Dolan (GB). Age 45. Born: Chelmsford, Essex. Lives: Monaco (MC): “We came to the WEC race and smashed it! We are really pleased with the victory and very happy with the Gibson-Nissan. Coming in to the WEC as ELMS regulars we can possibly view ourselves as the poor relations so to score such a dominant victory and set the race’s fastest lap blows that preconception away! We walked all over everybody and made a pretty positive statement and I personally couldn’t be happier. Harry and Mitch both did sterling jobs. We knew that the tyres were going to be the deciding factor all the way along so we were taking it really easy and Dunlop did us proud. I also loved qualifying – it was great fun. I was very pleased with my pace especially considering it was probably only the second time I’ve ever driven in qually.”

Mitch Evans (NZ). Age: 20. Born: Auckland, New Zealand. Lives: Aylesbury, Bucks, UK: “The race was relatively straightforward. I got into the lead quite early on in my stint and then built up a pretty big lead. The Gibson-Nissan worked really well allowing me to go at a good pace. I brought it in with a pretty big gap for Simon and he did a really good job. He was consistent going through traffic and then it was up to Harry and I to bring it home. The retirement of the No26 took the pressure off us but I think we would still have had their legs. Overall it was a positive three days and it’s a great way to go in to next month’s 24 hours. We had mixed conditions which was also good experience for me.”

Harry Tincknell (GB). Age: 23. Born: Exeter, Devon. Lives: Sidmouth, Devon (GB): “I’m absolutely delighted – it’s an unbelievable job JOTA Sport has done this week. I had the quickest lap in qualifying, the quickest lap in the race and dominated the race from start to finish. The Gibson was just fantastic each day. It was a wild start with cars not forming up side-by-side as we’d been instructed to do [in the Driver’s Briefing] coming out of the final turn before the green. So I just went for it, like everyone else, and so to say I was annoyed to get a penalty is an understatement. But I managed to channel my aggression in the right way. I fought my way back and Mitch and Simon both did a fantastic job.”

Sam Hignett. Partner, JOTA Group: “It was a great weekend! Each driver did a perfect, mistake free job while the team performed fantastically. Harry made a good start then recovered from the drive-through. Simon was brilliant and extended our lead while Mitch was stunning on his sportscar debut. The car was reliable and fast which is a great dress rehearsal for Le Mans.”