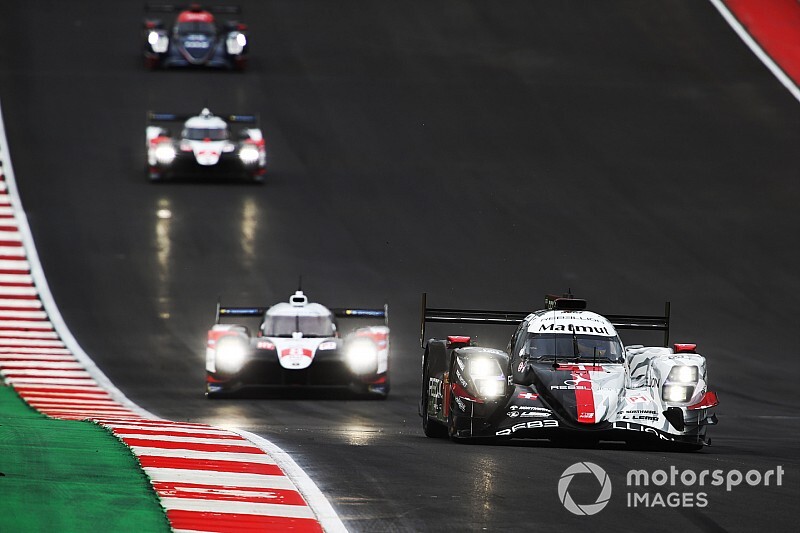 Sunday’s race at the Circuit of the Americas was notable for its lack of action in a sparse LMP1 field, with the solo Rebellion R-13 enjoying a clear advantage over both of the Toyota TS050 Hybrids and going to take an easy second win of the 2019/20 season.

The slower championship-leading #7 Toyota, which Kobayashi shares with Mike Conway and Jose Maria Lopez, was powerless to challenge the sister #8 car owing to its larger penalty, worth approximately half a second a lap on paper but more in reality.

After finishing two laps down on the winning Rebellion and the #8 Toyota, Kobayashi warned that the WEC will struggle to maintain fan interest without making changes.

He told Motorsport.com: “I don’t understand. They say it’s a handicap, but it decides who is going to win. We knew before coming into the race. It’s the worst race I ever had.

“If we keep this EoT, nobody will come to these races. This meant to be [high] technology racing. Nobody gets excited with the EoT stuff. As soon as you see our car, everybody says it looks slow. What does the spectator think? It looks really stupid.

“I don’t care if we are slow, but we need to take a broader view and [ask ourselves] why people get excited about this championship. It’s definitely a stupid idea.

“Rebellion won the race, but they probably don’t feel really happy. Who is happy in the end? Nobody. Everybody travels home feeling frustrated. It’s a bit of a joke.”

Kobayashi, part of the race-winning Wayne Taylor Racing line-up in last month’s Rolex 24 at Daytona, contrasted the situation in WEC with that of the IMSA WeatherTech SportsCar Championship’s DPi class, which features close competition between three brands.

“I have to say IMSA does a really good job,” said Kobayashi. “When I was there [in Daytona], I enjoyed. There was good competition; the point is they try to make close gaps.

“But the problem [in WEC] is the concept of the car is so far [apart], between our car and the Rebellion, it’s impossible. Of course, people try to calculate everything, but as soon as we start FP1, we need to adjust [the EoT] at least.

“We are here for entertaining people, either people who are coming here or watching on the TV. This race, if you are watching on TV, after half an hour I’m sure people are turning off the TV for this boring race.

“Why do we continue like this? We are here to entertain people and have a competitive race. But we do completely the opposite.”

Conway: Sebring will be same story for #7 crew

Conway admitted the Austin race was among the most frustrating he’s experienced, and fears that next month’s Sebring 1000 Miles will be a similar story.

The Briton said that the #7 crew’s five-point advantage in the standings is likely to again make it impossible for he and his teammates to challenge the sister Toyota.

“When it’s a couple of tenths a lap, you think maybe you can overhaul it,” said Conway. “But here there was just no chance, whatever we did we couldn’t get around it.

“[The disadvantage] was around nine tenths a lap on a clear lap, but in traffic it’s more because you’ve less boost to play with, it’s harder to clean the tyres. It might look on paper like it’s one thing, but it depends on the track, the conditions.

“Now going to Sebring we still have a deficit. We needed car 8 to win really to reset things more. We saw two points [of advantage] at Bahrain was worth two or three tenths a lap. I’m sure [five points at] Sebring will be worth five tenths at least.”