Tracy Krohn started the qualifying session and Maurizio Mediani ended it, securing the seventh grid position in the GTE-Am class.

Krohn Racing returned to the Silverstone Circuit this week with their newly updated No. 57 Ferrari F458 ready for Round One of the 2013 FIA World Endurance Championship. 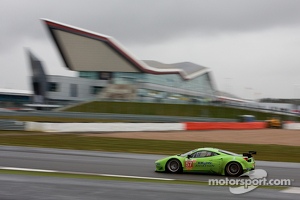 Cold and rainy conditions on the first day of practice yielded limited quality running time, although all three drivers – Tracy W. Krohn, Nic Jönsson and Maurizio Mediani – cycled through the cockpit. Saturday’s morning practice was in variable conditions for both Krohn and Jönsson.

The new WEC qualifying procedure requires two drivers to qualify the car a minimum of two full laps each and their lap times are averaged to establish their grid position. Tracy Krohn started the qualifying session and Maurizio Mediani ended it, securing the seventh grid position in the GTE-Am class.

Tracy W. Krohn, Krohn Racing Team Owner/Driver, No. 57 Krohn Racing Ferrari F458 GTE-Am: “I don’t think we’re that far off. We have three different drivers and variable weather conditions, which makes it harder to get the set-up right.

I went much quicker than I did yesterday in qualifying, so quick that when I came into turn 3 I got there quicker than I thought I would, hit the brakes and it was too late.

That won’t happen again though. Actually, the car is not that far off but there are a couple of little adjustments we can do to make the car better.

I’m cautiously optimistic about tomorrow and think it will be an interesting day…rain, shine or both. With the variable weather we’ve had this week it’s an advantage for everybody. If you didn’t learn anything, then it was your own fault.”

Nic Jönsson, No. 57 Krohn Racing Ferrari F458 GTE-Am: “We’ve had three practice sessions here at Silverstone in very different conditions. It’s been raining on and off and very cold the whole time so it’s been difficult to get a good handle on the set-up at this point.

All three drivers had to circulate through the car and we haven’t had any proper runs on the slick tires yet. The first time we ran in dry conditions was actually qualifying today. We had Tracy and Maurizio qualify and Tracy did a phenomenal job his first lap out with a high four (2:04 minutes).

I think that’s three seconds quicker than he had ever done around here. Unfortunately, he got caught out a little bit on the second lap. I think we have a pretty good idea what we need to do to the car to get it balanced for the race.

The car was a little loose for us in qualifying. We need to take that into account and look at look at some data to make a few adjustments.

We have also done some testing so we are looking at the aero data we gathered and hopefully be pretty close where we need to be for Sunday’s race in dry conditions, hopefully.”

Maurizio Mediani, No. 57 Krohn Racing Ferrari F458 GTE-Am: “I’m a bit disappointed I didn’t get a good qualifying lap. I’m going to work with the Engineer now. During the week and with all the weather, I did no driving at all in the dry conditions and the qualifying was in the dry.

Qualifying is not important for an endurance race. It is only for my mind because I wanted to go faster. It’s a problem in my mind that I want to solve by the end of the day. For tomorrow, with a six hour race it is quite long, so our strategy was not to be really perfect for qualifying.

David Brown, Krohn Racing Team Manager/Race Engineer: “We are disappointed to be so far down the grid. We don’t think it’s a true reflection of our pace. We will make some adjustments to the setup for the race tomorrow.

We expect to be competitive throughout the race and achieve a good result at this, Round One of the FIA World Endurance Championship.”

“We are glad to welcome Maurizio to Krohn Racing to join our driver line-up for 2013, where we know he will make a significant contribution, alongside our owner, Tracy, and our long term professional driver, Nic.

Maurizio attended two Krohn Racing tests before coming to Silverstone. We signed him as a result of his performance and our experiences at the tests.

We are looking forward to a fruitful, successful season in our recently updated Michelin-shod Ferrari F458. We are very pleased to be continuing our relationship with Michelin and looking forward to our first race here at Silverstone.”

Brawn on the praise and criticisms of F1's sprint race format