Krohn Racing to compete in Six Hours of COTA 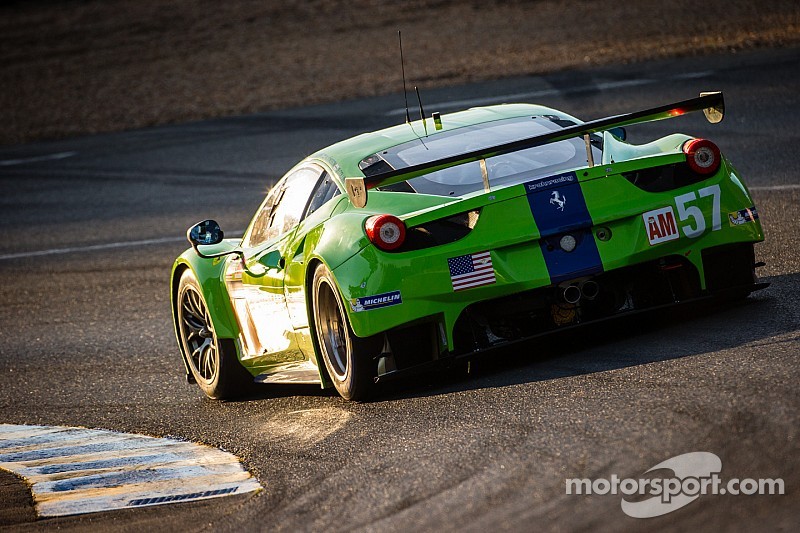 Krohn Racing joins the FIA World Endurance Championship (WEC) for the Six Hours of Circuit of the Americas (COTA) in Austin, Texas on September 20, 2014, as announced today by the WEC. The team will contend in the GTE-Am class of the international series, currently set to race alongside eight other teams in the ultra-competitive class.

The Houston-based team will race in Round Four of the 2014 FIA WEC calendar at Circuit of the Americas, their home track. The No. 57 Krohn Racing Ferrari F458 has been competing in a partial schedule in the IMSA TUDOR United SportsCar Championship this season, with a best finish thus far of fourth place at the 12 Hours of Sebring in March in the GTLM class. Krohn Racing also contested in the WEC earlier this year among the world's best sportscar teams in the 24 Hours of Le Mans in mid-June, finishing 10th in the GTE-Am class, so this return to the series in 2014 is much anticipated.

The current entry list for the Six Hours of COTA boasts 29 competitors and will feature a six-hour endurance event that will allow fans to see the FIA WEC teams race under the lights and into the night on the Austin circuit.

Brit Ben Collins, who joined Krohn Racing this season as the third driver for the 24 Hours of Le Mans, will reunite with the team for the upcoming Austin race. The former "Stig" from BBC's Top Gear has experience racing in the WEC, adding his 2014 Krohn Racing Le Mans appearance to a fifth-place finish in the GTE-Am class, also in a Ferrari, at the Six Hours of Silverstone in Great Britain in April of this year.

"Racing in the WEC event at COTA this season was something we'd been considering for a while and we're glad we are able to do it," said Krohn Racing owner/driver Tracy Krohn. "We enjoyed racing in the WEC in 2012 and 2013, and we jumped at the chance to compete within the series again, especially without having to leave our home state. We will have the opportunity to be competitive in the GTE-Am class, especially with Nic (Jönsson) and Ben (Collins) sharing the cockpit with me. We always like a good challenge and we're happy to be able to run this event then turn around and get our Ferrari prepped for Petit Le Mans for just two weeks later."

"Circuit of the Americas is such an amazing facility and the track configuration makes it really fun to drive," Krohn added. "It's incredible that we have this circuit right in our back yard and to race again in the global series for the six-hour WEC event is really special for us. I'm thrilled about getting to put on a show for all of our local fans, family and friends, and the international flavor that this series attracts is second to none."

"WEC is a very professional organization and I'm very pleased that we have been given the permission to race in the GTE-Am class for the COTA event," said Swede Nic Jönsson. "The series is getting more competitive every year with world-class drivers and teams. It's going to be very interesting and exciting to come back with the "mean green Krohn Racing Ferrari machine".

"To be able to come back to COTA makes it even more special since this is just a few hours away from Krohn Racing's headquarters in Houston, so we consider this our home track," continued Jönsson. "And with my co-driver Tracy Krohn being a native Texan this is going to be great. I feel that our car has been strong this year and I'm really looking forward to competing in the WEC again."

"It was a fantastic opportunity to race with Krohn for the first time at Le Mans and I really clicked with the team because they're such a great bunch of guys," said Ben Collins, who has been racing for 20 years. "Thanks to all their hard work we had a podium position in our sights, which was really impressive given the circumstances, and I reluctantly handed my green overalls back in at the end of the weekend. I'm delighted to be back with the 'Green Machine' for their home event in Texas."

"As a team, we discussed at length the pros and cons of entering the WEC race over the IMSA TUDOR race; primarily, it is down to the level of competitiveness we can perform relative to the opposition, as well as the increase in drive time for the drivers," said Gary Holland, team manager for Krohn Racing. "This presents the team with some changes to the car specs, as we will be competing at Petit Le Mans just two weeks later, but overall the change to the WEC is a very positive one. The TUDOR Championship is a great competition but being the only privateer team in the GTLM class, as well as having the only Pro-Am lineup, puts us at a great disadvantage from the outset. Therefore, we feel that we can operate on a much more level playing field in the GTE-Am category in the WEC race, as the competing driver line-ups have the same driver categorization."

"We had a strong Le Mans run from the same driver line up we will use at COTA (Krohn, Jönsson, Collins), until a car issue caused some delays, so we know the drivers perform very well as a unit and should give the team the best possible chance of success," continued Holland. "Austin is the team's home race and is one that we are greatly looking forward to, as the circuit is loved by everyone and having both the TUDOR and WEC race will make for a great spectacle."

Krohn Racing is the fourth American team to enter the FIA WEC Six Hours of COTA and is the only local team in the enduro competition.

Confirmed: Factory Corvette to race in WEC at Circuit of the Americas