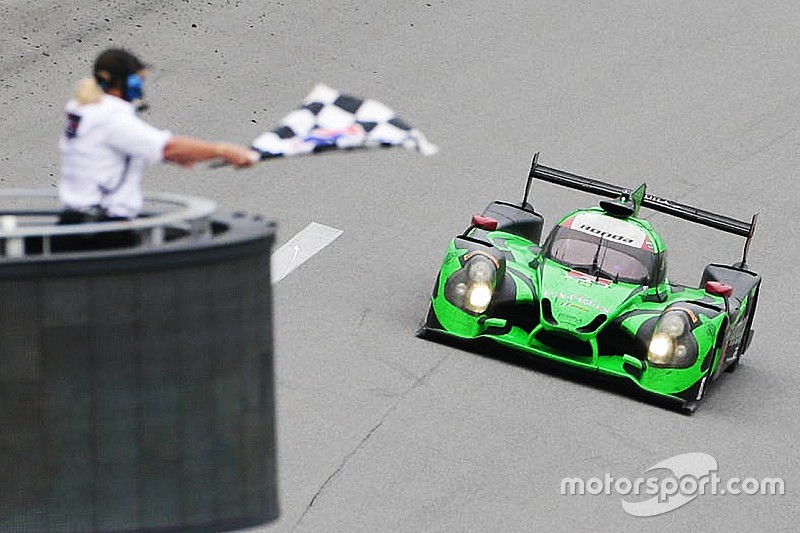 The winner of this year’s Daytona and Sebring endurance racing classics, Pipo Derani, is targeting his own unique triple crown this weekend at Petit Le Mans – as he aims to increase his chances of a shot at the LMP1 big time.

Derani made the switch from Formula 3 to LMP2 at the end of 2014 and put in a remarkable debut performance at Paul Ricard by leading the race in the unfancied Murphy Oreca.

Snapped up by the G-Drive Racing team, which had a technical tie-up with the Onroak constructor that designs and builds the range of LMP2 and LMP3 Ligiers, Derani then became one of the key development drivers for the French concern’s global endurance programme.

Switching to the Tequila Patron ESM team this season allowed Derani’s career to take off with an early-season double victory at Daytona and Sebring. In winning these two classic events, the 22-year-old Sao Paulo native became the first ever driver to win both in the same season at the first attempt.

“It was a special start to the year for sure,” says Derani. “To be fortunate enough to win both races was really something. You know, going there [Daytona and Sebring] for the first time felt quite natural to me. It wasn’t easy, but I really concentrated and prepared well.

“It was the same at Le Mans in 2015. I went there to learn and to understand the race and we came away with a third placed points finish. Racing is as much about the mental and technical preparation as it is the physical and actual driving. These are the values I work to in my profession, and I always will work like this.”

What Derani, in his typically modest manner will not tell you, is that he was completely instrumental in those wins in Florida earlier this season. His reeling in of several cars in the closing stages, before driving away from them, put him firmly in the spotlight.

“The attention on me was nice and flattering of course, but the most important thing is the team ethic and how, as a whole, we compete and win together,” he says. “That is what endurance racing is all about. I have learnt this over the last two years and I have really concentrated in using it to the maximum in order to learn and optimise all the variables there are in sportscar racing.”

Among those variables is the often-derided categorisation debate in modern-day endurance racing. It is one Derani, a gold-categorised driver, acknowledges.

“Yes, I think I share the same opinion as many others that there are drivers out there racing as ‘silvers’ when they clearly aren’t in that bracket,” he adds. “But there is no point in that getting you down as we can’t do anything to change this happening. Sometimes it is just part of the system.

“The good thing at Petit Le Mans is we don’t have any of that and we can challenge for the North American Endurance Cup on pace and merit.”

The target for any talented young driver on the global endurance stage is to get a factory programme, and Derani is no different in his aims.

“I am determined to get a chance with a major manufacturer endurance programme,” he says. “I feel ready for the next step and am focused on being 100 percent prepared when the opportunity arises. If that is not in LMP1, because the places are so limited, then I would love to continue in the WEC potentially in LMGTE Pro.”

After the Tequila Patron ESM squad elected to change from Michelin to Dunlop tyres after Le Mans, Derani’s performances have been somewhat masked by the gap between the two manufacturers’ LMP2 rubber.

Still, the Brazilian scored a third WEC podium at Nurburgring after one of his best drives of the year. A month later he was the significant contributor to a fourth podium after a feisty drive in Mexico City.

On his immediate future Derani is cagey and wouldn’t elaborate on rumours that he could race in both the WEC and North American Endurance Cup in 2017: “For sure things will be revealed soon. I can’t go in to much detail except to say I am halfway there on doing a combined programme. We are working hard on getting the other half in place.”

WEC has been Derani’s home for the last two seasons and he is unequivocal in his belief that it is the pinnacle of endurance racing and prepares a driver in a unique fast-track manner.

“The WEC is a fantastic competition; it is a highly professional championship and there is no room for error at all,” he says. “You have to be prepared in every conceivable way. I came in to it from F3 and have been able to prove myself immediately.

“I believe that the WEC’s and the ACO’s development and vision of young drivers with the end of season LMP1 test is a great motivator and a worthwhile incentive.”

Derani, with his performances over the last two seasons is surely in the mix for a chance with an LMP1 team in the end-of-season test at Bahrain. The Brazilian has consistently been among the quickest LMP2 drivers, and has caught the eye of many in the WEC paddock as a potential future LMP1 racer.

He has also carved an impressive reputation as a trusted development driver, and has been used by Onroak recently to put the first miles on the all-new Ligier LMP2 car.

“The first tests have been really good, the car has big promise,” adds Derani. “I am proud to be part of it because Onroak has put in a lot of hard work to be first constructor in LMP2 to run the new Gibson drivetrain package.”