Audi won their 10th Twelve Hours of Sebring and the first race of the 2012 FIA World Endurance Championship (WEC). For their long-time driver Tom Kristensen, he notched his record seventh victory at the Florida circuit, and his sixth in the 12 hour event. It was also the farewell race for the diesel-powered Audi R18.

In the 60th edition of the historic event, the Audi R18 of Kristensen, and co-drivers Allan McNish and Dindo Capello completed 325 laps to win the overall and LM P1 category, their third Sebring victory together as a trio. McNish took the checkered flag four laps ahead of their sister Audi of Timo Bernhard, Romain Dumas and Loic Duval. While Duval is a new driver for the Audi factory team, he did land the win last year.

"A fantastic result," said McNish, joking that it was Kristensen's "twenty-fifth" win at Sebring and that he and Capello were, "too young to have that many."

"To start off the World Championship with a victory is fantastic," he added.

The third Audi Sport Team Joest car, the #1 pole-sitting car of Andrea Lotterer, Benoit Treluyer and Marcel Fassler suffered mechanical difficulties during the race and spent over forty-seven minutes in the pits, the third longest of any of the cars with problems. It eventually finished sixteenth overall, but fifteen laps behind the other Audis. Lotterer had the consolation of posting the fastest lap of the race to go with his fastest qualifying time.

It was amazing to come here and celebrate the team effort.

McNish pitted early under the first full-course yellow, and when most of the field had to pit later under green, this gave them the advantage. The three Audis traded the lead throughout the race, leading all but two laps, but once the pole-sitting Audi hit trouble; it was clear sailing for the winners.

"It was amazing to come here and celebrate the team effort," said Kristensen. "It was a great car prepared by Team Joest. We are celebrating 60 years here, but we are also celebrating sports car heritage. The next step is we'll bring the hybrid car. Later we have the 80 years at Le Mans, it is a very important year, 2012." They have started that important year by taking the lead in the new world championship

Third overall was the leading LM P2 category car belonging to the only American team in the LMP categories in the WEC. The Starworks Motorsports HPD ARX.03b was driven by Ryan Dalziel, Vincente Potolicchio, and Stéphane Sarrazin.

"It was amazing to finish on the podium," said a jubilant Sarrazin. "We made no mistakes and the car was very, very good." Dalziel added, "The job the guys did in the past couple weeks was just phenomenal.” 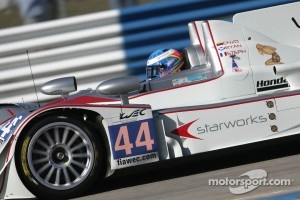 "The last time I was here was 2001 in a Formula Ford 2000," said Potolicchio. "We did a total of 18 laps before the green flag. I have two of the greatest drivers in the world. To have Stephane on the team is amazing. We put the 4 installation laps in before the practice. This is the first step for us, being 3rd overall in a P2 car was amazing. Stephane finished 3rd last year but in a P1 car. I'm looking forward to a lot of fun this season in the FIA WEC."

Third in the LM P1 category, finishing sixth overall and seven laps down on the winners was the Pescarolo of Jean-Christophe Bouillon, Emmanuel Collard, and Julien Jousse. They had qualified last of the LM P1 WEC cars, so were happy with the result.

Second in the series LM P2 category was the pole-sitting OAK Racing Morgan of, Jacques Nicolet, Olivier Pla, and Matthieu Lahaye, finishing a lap down on the winning HPD. Third in the category was the PeCom Racing Oreca 03 Nissanof Soheil Ayari, Pierre Kaffer, and Luís Pérez Companc.

The most exciting action in the race came in the LM GT category, especially towards the end of the race with numerous battles including those of the WEC race winner Olivier Beretta. Beretta found himself battling with cars from the American Le Mans Series “GT” class in a whirlwind final few laps. Beretta’s excitement included a trip over the grass with just a couple minutes remaining in the race.

"The BMW went sideways," Beretta explained. "I jumped on the brakes and lost it.” 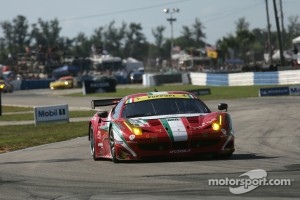 The BMW in question had been tapped by the Ferrari of Gianmaria Bruni, who despite being about one hundred laps behind, was still trying to pass cars he was not battling with. The Ferrari had started the race from pole position for the class but mechanical troubles early had resulted in it spending over an hour and fifteen minutes in the pits. Bruni completed the fastest lap in the category nonetheless.

Beretta survived the scare though at the end, even though the ALMS team car was in front at the checkered flag. Due to the separation of the two series in the combined race, Beretta and with his co-drivers Andrea Bertolini, and Marco Cioci finished in their Ferrari a lap ahead of the second WEC LM GT positioned car, the Team Felbermayr-Proton Porsche of Marc Lieb, Richard Lietz, and Patrick Pilet.

Not only had the race been tough on the pole starting team but it was also hard for the car that started second. The Luxury Racing Ferrari of Frédéric Makowiecki, Jaime Melo, and Jean-Karl Vernay was involved in a big crash just after the three hour mark. Despite leading the category before that, they only completed 83 laps.

Troubles in the in the class were such that the third place WEC team finished fourteen laps behind the second placed car. The Aston Martin of Stefan Mücke, Adrián Fernández, and Darren Turner completed 292 total laps.

Trouble also hit the leading cars of the LM GTE-Am category. The WEC pole-sitting Luxury Racing Ferrari of Pierre Ehret, Dominik Farnbacher, and François Jakubowski was involved in an incident before the green flag, so they did not even complete a lap of racing. 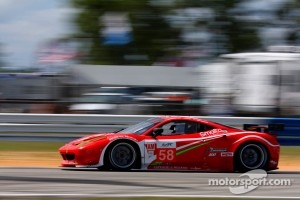 The winners of the category were Christian Ried, Gianluca Roda, and Paolo Ruberti in the Team Felbermayr-Proton Porsche. They completed 298 laps and finished twenty-ninth overall. Second was the Larbre Compétition Chevrolet Corvette driven by Jean-Philippe Belloc, Christophe Bourret, and Pascal Gibon; finishing a lap down on the winners. Third in the category was their teammates Patrick Bornhauser, Julien Canal, and Pedro Lamy, a further nine laps behind.

Ruberti had taken the lead from Lamy with only twenty minutes remaining. The two had exchanged the lead a couple of times prior to their final battle towards the end before Lamy stopped with mechanical troubles.

"We are really happy to win the first FIA WEC and the 12 hours of Sebring," Ruberti said. "It's like a dream. The car was perfect; we had a bit of trouble in the last hour. I did the last stint without the power steering. I kept the car on good pace with good results. The Ferrari is a little faster than us, but we were in fact in the best position. In this place we need to now finish all the races for a good result."

McNish reflected on the Audi R18 which goes into its retirement after the Sebring race. McNish of his race-winning Audi said, "Sounds like a good way to send it off after 2011. We are looking now at the next race in the World Endurance Championship."

The next FIA World Endurance Championship race takes place May 5th, the 6 Heures de Spa-Francorchamps, in Belgium at the fabulous Spa circuit.

Racing into the night at Sebring can bring magic or heartache