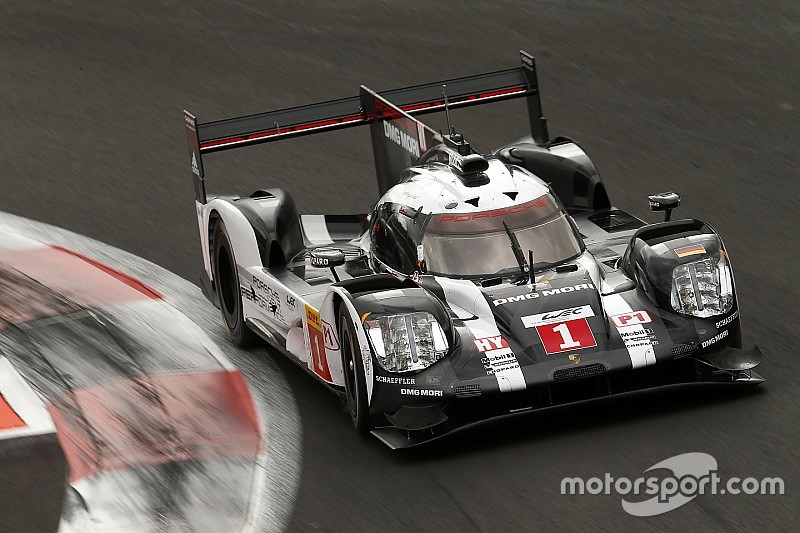 Porsche’s reigning world champion crew won the 6 Hours of Mexico after a thrilling rain-affected race, despite a pitlane penalty, a late-race moment and a strong challenge from Audi.

The #1 car – crewed by Mark Webber, Brendon Hartley and Timo Bernhard – stayed mainly out of trouble despite treacherous weather conditions at the sinuous Autodromo Hermanos Rodriguez.

In an incident-packed race, the Porsche 919 Hybrid won despite a drive-through penalty for a pitlane entry white line infringement when Bernhard tried to abandon a pitstop too late due to a full-course yellow. The German crossed the white line at the entry to the pitlane, in what Webber said was a “miscommunication” and “a lot of panic”, and while Hartley was leading comfortably, he thus had to serve a drive-through penalty.

That dropped the #1 Porsche to third, but Hartley quickly dispensed with its #2 stablemate and repassed the #8 Audi at Turn 12.

Rain arrived just after half distance, which spelled the downfall of the frontrunning Audi #8’s chances as Oliver Jarvis spun off the track at Turn 1 into the barriers, saying, “The [brake] pedal went to the floor.” It later transpired that a wheel bearing failure was to blame.

The #1 Porsche’s main challenge thereafter came from the #7 Audi, which recovered from an early setback when the car suddenly lost grip on its first stint. Andre Lotterer was right in the frame for victory, having carved into the #1 car’s lead in wet conditions, but then he locked up and went off in the stadium section.

A late-race rain shower threw another spanner in the works, and Bernhard had a heart-stopping moment when he lost control on the kerbs and went up the escape road at the Peraltada. He recovered to win by 1m01s, ahead of Lotterer who cleverly took intermediate slicks for the final stint.

The points-leading #2 Porsche should have finished on the podium, but Marc Lieb was hit from behind by Nicolas Lapierre’s Signatech Alpine under braking for Turn 4, which removed the legality panel at the rear of the 919 and it had to be replaced.

That opened the door for Toyota, and Stephane Sarrazin, on slicks, grabbed a position from Jani in the #2 Porsche – who was using the slick intermediates – with 1.5 hours to go.

That became second when the #7 Audi went off, but Lotterer recovered quickly from his off and managed to battle his way ahead of the Toyota in his final stint to claim second.

The #5 Toyota went out early with a hybrid powertrain failure.

The local RGR Sport by Morand squad snatched victory in the final 40 minutes when the G-Drive Oreca, that looked poised to take its first win of the year, suffered a right-front brake failure with star driver Rene Rast at the wheel.

Earlier, there was controversy when RGR’s Ricardo Gonzalez – who promoted this event – was punted into a spin by Roman Rusinov. The #36 Signatech Alpine finished second, despite its clash with the #2 Porsche and a drive-through penalty for a pitstop infringement.

Gonzalez’s teammates Bruno Senna and Filipe Albuquerque were there to inherit the victory, which went down well with the frenzied local support.

Aston Martin scored its first GTE Pro victory of the season, but lost its 1-2 finish when Nicki Thiim spun off into the barriers in the rain.

The Darren Turner/Richie Stanaway-crewed #97 car avoided any disasters and cruised to a dominant win ahead of the #51 Ferrari of Gianmaria Bruni and James Calado, while Thiim recovered to finish third ahead of the #71 Ferrari.

The GTE Am class lead changed hands a number of times, but the Abu Dhabi/Proton Porsche of Khaled Al Qubaisi, David Heinemeier Hansson and Patrick Long was there when it mattered.

The #83 AF Corse Ferrari of Emanuel Collard, Francois Perrodo and Rui Aguas finished second – despite a brush with the wall at the Peraltada.