No. 8 Toyota secures pole position for Six Hours of COTA 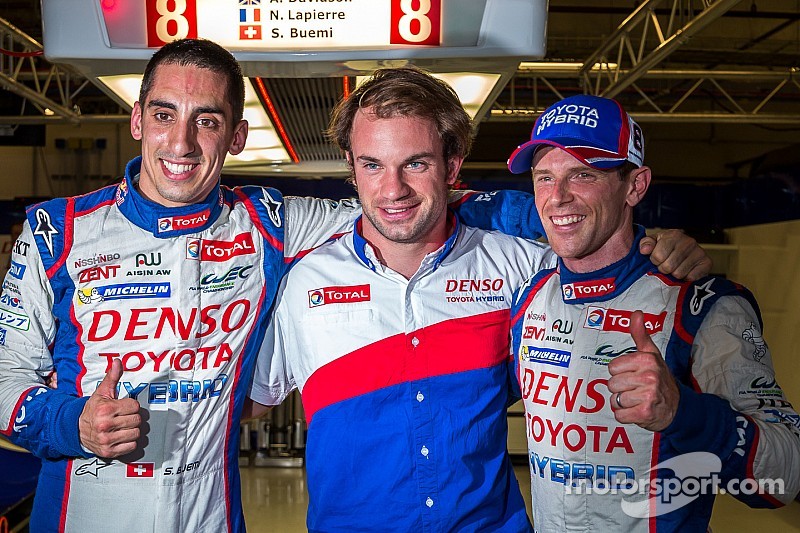 Toyota has claimed pole for tomorrow's WEC race at the COTA.

Toyota Racing won the first battle of the weekend at Circuit of the Americas this evening by taking pole position for the fourth round of the 2014 FIA World Endurance Championship. It was the perfect way for the Japanese manufacturer to renew its title campaign after losing points to rivals, Audi Sport Team Joest at the Le Mans 24 Hours in June.

The No.8 Toyota TS 040 Hybrid, driven by Anthony Davidson, Nicolas Lapierre and Sebastien Buemi celebrated their third pole position of the 2014 season, with Buemi confirming the top position with some scintillating laps. The pole-sitters average for the four best times stood at 1m49.093, and they were the only entry to get below the 1m50s mark at all.

After a red flag was flown for the retrieval of the No.12 Rebellion R-One-Toyota, which had stopped at turn 11, it set up a dramatic final four and a half minutes shootout to decide the front of the grid.

When the No.37 SMP Racing Oreca-Nissan spun and stalled on the track, bringing out the yellow flags, any chance the Toyota’s opposition had of challenging instantly faded.

The chase of the pole sitter was incredibly close with the #14 Porsche 919 Hybrid of Neel Jani, Romain Dumas and Marc Lieb just heading off stable mates Mark Webber, Timo Bernhard and Brendon Hartley, by an average of just 0.019s.

Jani had one of his laps annulled due to going over his ERS limit which dictates the fuel consumption allowance during individual laps. It was the first time this season that this particular sanction was carried out.

Audi will start the 6 Hours of the Circuit of the Americas from fourth and sixth positions with the No.2 Le Mans 24 Hours winning Audi R18 e-tron Quattro heading the No.1 Audi Sport Team Joest LMP1, both cars suffering from a software issue during qualifying.

The LMP1-L category was a straightforward affair as a fly-by-wire throttle problem for the No.12 Rebellion car ensured that the No.13 Rebellion R-One-Toyota took the pole with an average of 1m54.665.

Sadly, the Lotus entered CLM P1/01 AER did not take part in the qualifying session after experiencing a gearbox problem in the final free practice session this morning. The team have been given dispensation to start the race but must do so from the pit lane and after the first flying lap is completed by the entire field.

Celebrating its third pole in LMP2 this season and the team’s second consecutive COTA pole, albeit in a different chassis, was the G-Drive Racing squad with their new Ligier JS P2-Nissan.

Roman Rusinov and Olivier Pla delivered an average lap time of 1m58.075 to give themselves the best start to clawing back some of the 25 point deficit to the SMP Racing points table leader, Sergey Zlobin.

Sharing the front row will be the KCMG Oreca-Nissan. Matt Howson and Richard Bradley took part in the qualifying session and came within three tenths of a second of pole but have a solid foundation to challenge for their first win of the season in tomorrow’s race.

Extreme Speed Motorsports upheld US honour in qualifying third fastest to make it three different chassis in the top three grid positions. The Scott Sharp, Ryan Dalziel and Ed Brown piloted car will be in a good position to ensure the local crowd has plenty to cheer throughout the race, which begins at 17.00 local time tomorrow.

AF Corse will lead GTE-Pro to the green flag

The No. 51 AF Corse Ferrari 458 Italia driven by Gimmi Bruni and Toni Vilander will start from pole position for the fourth round of the FIA World Endurance Championship, which is the feature event for the Lone Star Le Mans weekend in Austin, Texas.

Bruni left it until the last lap to secure a thrilling third pole position of the season for the Italian/Finnish duo, who set an average lap time of 2m06.456 and who lead the class points table by 27-points going into tomorrow’s race.

The session had been officially declared wet by FIA WEC Race Director Eduardo Freitas as rain gently coated the Circuit of the Americas.  The drivers faced extremely challenging conditions with some parts of the track much damper than others but, as the session wore on and the track dried, the times started to tumble and first Vilander and then Bruni maximised the extra grip to secure a hard-won pole position.

Sharing the front row of the LMGTE Pro grid will be the No.97 Aston Martin Vantage V8 of   Darren Turner andStefan Mückewhich missed out on pole by six tenths of a second over the best average of four laps (two from each driver).

Porsche Team Manthey locked out the second row of the Pro grid with the No.92 Porsche 911 RSR heading the sister No.91 machine.

The Prospeed Porsche 911 RSR fought off stern competition from the No.95 Aston Martin and a trio of Ferrari 458 Italias throughout the 25-minute session.

Richie Stanaway’s pacy laps in the Aston Martin Vantage V8 he shares with David Heinemeier Hansson and Kristian Poulsen looked to have secured pole but late, fast laps from Collard ensured they were beaten by just under one tenth of a second. Heinemeier Hansson and Poulsen currently head the points’ standings by 18-points.

Late laps from Mirko Venturi in the No.61 AF Corse Ferrari made it three marques in the top three starting positions in the LMGTE Am class. The Italian shares the F458 Italia with Luis Perez-Companc and Marco Cioci.

Another pole for Toyota Racing