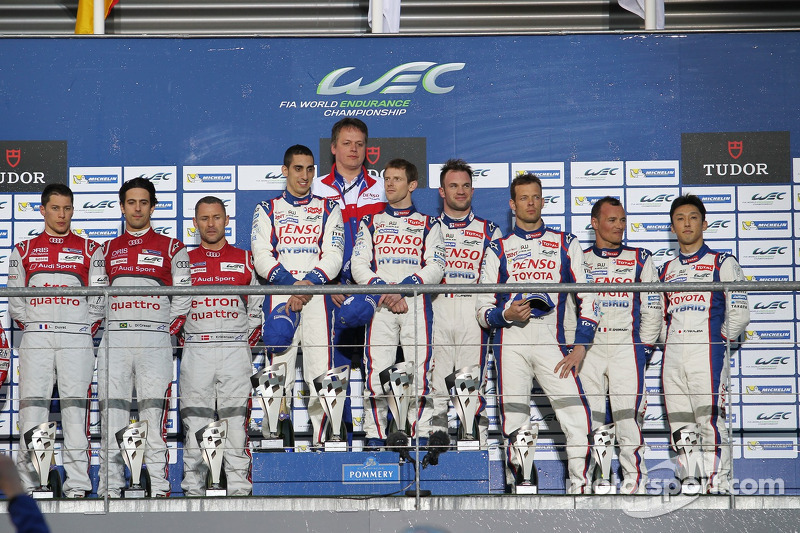 Toyota continues to impress, taking the victory in both the first and second races of the WEC season.

The No. 8 Toyota LMP1 machine took the overall victory in the Six Hours of Spa-Francorchamps Saturday. They have made a serious statement heading into Le Mans, winning the first two races of the 2014 season. The car, driven by Anthony Davidonson, Nicolas Lapierre, and Sébastien Buemi had a one lap advantage over their closest adversary.

Finishing second was the No. 1 Audi (Lucas Di Grassi, Loïc Duval, Tom Kristensen) and 3rd was the second Toyota (No. 7 driven by Alexander Wurz, Stéphane Sarrazin, Kazuki Nakajima). Both Porsche's ran fairly strong and ahead of Audi before being marred by issues during the event. There wasn't a single safety car intervention during the six hour race.

It looks like Audi will have a serious fight on their hands as they try to defend their crown in the 24 Hours of Le Mans.

Anthony Davidson: “This season is the first time I have ever led a World Championship. To win again here for one of the team’s home races, with a lot of support from the guys from Cologne, was fantastic. Sébastien did a lot of the hard work in the difficult middle part of the race so when I got in it was pretty much job done. It’s great we got two cars on to the podium again. Now our attention has to turn to the big one in June. I am so confident in the package we have and the team around us; it really feels like we are flourishing at the right time.”

Nicolas Lapierre: “It was a great result for the whole team. Since the beginning of the weekend we did everything well; in qualifying we extracted everything we could and during the race we stayed calm. It was a very tough race with Porsche. We took the lead on the pit stop so I want to say thank you to the mechanics. Sébastien and Anthony drove very well so we could extend the gap. At the end it was more under control so we just had to get to the flag safely. We have seen here that our Le Mans package is working well and the hybrid system was wonderful. We are very happy with this result; it is the best way to get ready for Le Mans.”

Sébastien Buemi: “I am really happy with today’s race. It is our third win on the trot after our victory at the end of 2013 in Bahrain and then earlier this season at Silverstone. The race was hard. When I jumped in the car I could start to close the gap to the leader and when we took the lead we had to push hard to make a gap. But when the #14 Porsche had some trouble we knew we were in control; we just had to make sure we didn’t make any mistakes. When you win the first two races of the season, it is perfect preparation for Le Mans. But we have to focus on getting the basics right. We have better preparation than last year so we’ll see what we that brings.”