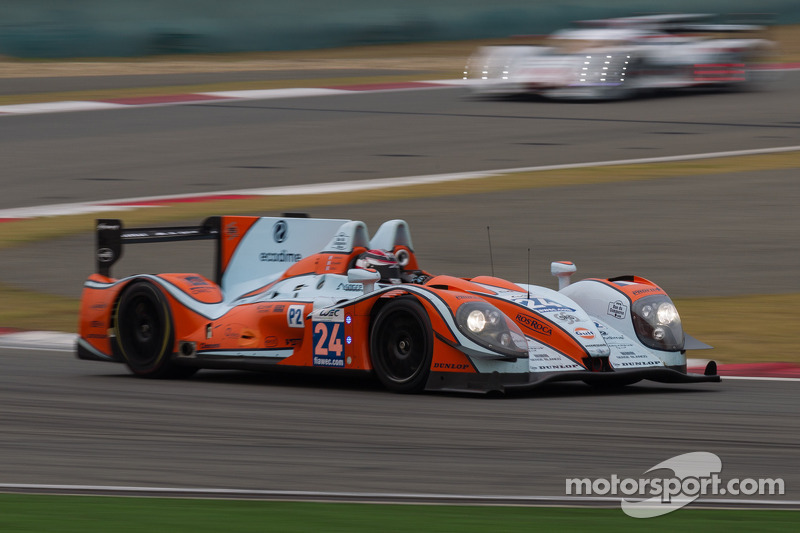 Despite fine efforts from both driver crews, the French team feels the results fall below expectations given the true pace of its #15 OAK-HPD LM P1, which was making only its second appearance of the season, and Onroak Automotive designed and built #24 Morgan-Nissan 2012 LM P2 that finished fourth overall in this year’s final class standings after scoring four podiums in eight races. 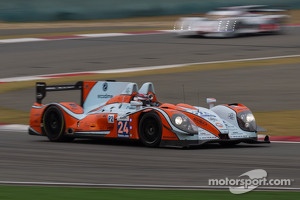 Nevertheless, these results do offer much optimism for next season.

The battle for a place on the LM P2 class podium proved as fierce as ever at the inaugural FIA WEC season finale where Pla, who qualified fourth on Saturday, made his customary flying start to immediately jump into the lead by going around the outside of three cars.

He would retain the position until handing over to Lahaye who produced a brilliant double stint of his own to hold off Mathias Beche in the charging ADR-Delta Oreca.

Silver grade driver Nicolet then had the hefty task of replacing Lahaye, who had established a slender lead of just five seconds, before handing the car back over to Pla in fifth place.

Displaying the same gusto with which he started, it wasn’t long before the Frenchman had moved into third where he would remain for the rest of the race behind winners ADR-Delta and Starworks Motorsport, but 30 seconds clear of Pecom Racing.

Meanwhile, Kraihamer took the start aboard the #15 OAK-HPD LM P1 before Sato climbed aboard for his double stint. Unfortunately both drivers experienced a brake problem that prevented them from fully exploiting the car’s potential.

After three hours of racing, and now with Baguette at the wheel, the left front disc failed, forcing the Belgian RACB driver into the pits. Despite the mechanics’ rapid response, they were powerless to prevent the car dropping from seventh to eighth.

While the six laps lost also ended any chances of challenging its privateer rivals, the car did display excellent pace in the hands of Baguette and Kraihamer later in the race following competitive stints from both drivers.

Sébastien Philippe, Team Principal: “We really went for it in LM P2 but just missed out with a few things that, due to the top-three finishing on the same lap, made the difference between a place on the podium and victory.

Olivier Pla and Matthieu Lahaye were both excellent but the bad weather earlier in the weekend hindered Jacques Nicolet’s track time that was crucial to him learning this unusual circuit.

It’s still early days for the LM P1 and HPD engine so while we closed the gap to our privateer rivals in terms of performance, brake problems ultimately hindered our progress despite a great effort from the crew.

Overall, the team has evolved throughout the season even if we have not been able to experience the results our expectations demand. But we have also probably deserved a little better!”

Jacques Nicolet, OAK Racing President (and #24 Morgan-Nissan 2012 LM P2 driver): “I can’t help feeling this is a lacklustre end to our season. The results do not reflect the measures implemented despite scoring four podiums in LM P2 throughout the year.

We have worked hard and changed engine suppliers mid-season but have not always enjoyed the best of luck. However, we have succeeded in demonstrating the qualities and performance of our Morgan 2012 LM P2 just as we did in the European and American Le Mans Series, which is satisfactory on the part of the manufacturing and design office that created it.

This bodes well for the future, just like today’s performance of the OAK-HPD LM P1 that was making only its second race appearance of the season. The results are certainly not up to our expectations but we will draw conclusions and react quickly in preparation for 2013.”

Matthieu Lahaye, #24 Morgan-Nissan 2012 LM P2: “It's always good to finish the season on the podium and our 6 Hours of Shanghai ran reasonably smoothly.

After Olivier made an excellent start we managed to maintain the lead during the race’s opening half. Part two was a bit more difficult and our competitors seemed stronger than us.

On balance the season has been a little frustrating due to experiencing a few technical problems. But the performance has always been apparent and we have shown the Morgan 2012 LM P2 to be one of the best cars in its class during perhaps the most competitive season the category has seen since its creation.

We have nothing to be ashamed of in terms of results. Personally, I have enjoyed a great season working with my two team-mates. I have been with OAK Racing for five years now and had previous experience of racing with Jacques.

And in Olivier I have discovered a very talented driver too.”

Olivier Pla, #24 Morgan-Nissan 2012 LM P2: “Our goal was to score victory here in Shanghai so even though third place is nice, it's still a shame for the team.

We’ve had our share of glitches throughout the season but have shown the performance of our LM P2. Fuji aside, we have led at some stage during every round this season which proves the car’s potential.

But the overall result is somewhat mitigated due to us not winning a single WEC race after stating at the start of the year that we intended to win the title.

That’s something we must accept. I’d like to thank the whole team, mechanics and engineers for their hard work throughout the season. They have built a very good car and it has been a pleasure to work with them.”

Bertrand Baguette, #15 OAK-HPD LM P1: “The start of the race was very difficult due to the front left brake disc getting very hot and eventually failing during my stint.

Once it was replaced we were able to lap 1.5 seconds faster and match the pace of the other LM P1 privateers. This is very promising compared to the 6 Hours of Fuji, although unfortunately reliability was not with us.

Both Takuma and Dominik did great jobs. It’s been a pleasure to share my season with them and, of course, Guillaume Moreau who taught me a lot early in the year.

An OAK chassis equipped with Honda engine is a powerful package and we have ended up back in the hunt despite suffering from a three-race absence, so it’s a shame that the season has to end now.”