The LM P2 class challenger will leave the workshop for its first shakedown in a few days.

The Ligier JS P2, a closed LM P2 sports prototype, is the first racing car conceived entirely in house by the Onroak Automotive design department. The project has been led by Nicolas Clémençon from its creation, and his team started from a clean sheet of paper to design the new model. They were able to avail themselves of the experience gathered with the Morgan LM P2 penned at the end of 2011. The French constructor also took advantage of the work carried out by the different teams running this LM P2.

The Ligier JS P2 is a completely new car which will be available for the three remaining seasons of the current ACO-FIA regulations in force until 2017. The three engines currently on offer, the Honda HPD, the Judd HK and the Nissan VK45, can all be installed in the car’s engine bay and its closed monocoque will enhance the JS P2’s overall level of safety.

After the success of the Morgan LM P2, the Ligier JS P2 will complete Onroak Automotive’s offer with the same aims in terms of performance and reliability. Thus, the Sarthe-based company confirms its determination with the Ligier make to become a race car constructor selling a complete range of sports prototypes. To celebrate this rapprochement a new logo will symbolize the Ligier identity. 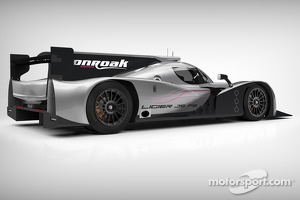 The Morgan LM P2 will continue its successful career. It is one of the best prototypes in the LM P2 category as confirmed by its results in 2013, which will be reinforced by those scored by the teams that have opted for it this year.

In 2014, Onroak Automotive will be present on endurance circuits everywhere with two types of LM P2s, the Morgan LM P2 and the Ligier JS P2, plus the Ligier JS 53 EVO in CN.

Jacques Nicolet, Président Onroak Automotive : “I’m really delighted that the first 100 per cent Onroak Automotive product is a Ligier. I’m sure that the association of the work of Onroak Automotive and the Ligier name will give real meaning to our first car at both a sporting and a passionate level. Its name is the JS P2, a mark of respect to the history of the make, and a way of preparing our future by feeding on Ligier’s glorious sporting past. With its closed bodywork the Ligier JS P2 is an exceptionally attractive product, in particular for teams interested by the Tudor USCC, the new American championship in which closed cars predominate, and which will open up fresh development possibilities for us. Indeed, mastery of the design of closed cars seems to me to be an essential factor in the expansion of Onroak Automotive in the future. I’m very proud of the work done by all the Onroak Automotive teams and I can’t wait to see the Ligier up and running on the track!”

Nicolas Clémençon, Head of the Onroak Automotive design office : “We’ve been wanting to design a new closed LM P for a long time, and now we’ve done it. This project is the fruit of lengthy reflection. We’ve included a certain number of tweaks in this car: a concentrate of the strong points of the Morgan LM P2. A lot of work went into the validation of its aerodynamics with new elements tested at RUAG Aerospace; it has the latest state-of-the-art closed monocoque, a touch of innovation and its own identity and character. Thanks to our top-class design office peopled with high-quality designers who are all enthusiasts, we’ve penned a brand-new LM P2 destined to write more chapters in the history of Ligier in endurance. This Ligier LM P2 is the ideal shop window to show off Onroak Automotive’s know-how!”

Thierry Bouvet, Onroak Automotive’s technical director : “We can’t wait to see the Ligier JS P2 running as it’s the outcome of several months’ studies and work. Onroak Automotive’s aim is to offer a car that’s been fully sorted out down to the tiniest detail: now we’re going to begin the validation process on the track before homologating it.”