SECOND PLACE AND LEADERSHIP STRENGTHENED IN THE 6 HOURS OF SPA 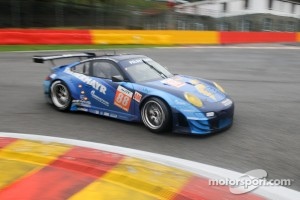 06/05/2012 - Paolo Ruberti confirmed to be one of the men to be beate in FIA WEC 2012 in Spa (B). The Italian Champion, sharing the drive with Gianluca Roda and Christian Ried at the wheel of a Porsche 911 RSR, ended the Belgian six hours, the second round of the season, on the podium of class LMGTE-Am. The result together with the victory in Sebring's 12 hours strengthened his classification leadership.

Qualifying on Friday ended with the eighth time set by Ried (2'25.358), a result that did not worry the drivers of team Felbermayr-Proton. Ruberti has been protagonist of a challenging double stint in the three final hours of a wet race since the intial stage, where he constantly kept a high rhythm allowing him to obtain the final second place and the fastest lap of the race (2'22.085).

Paolo Ruberti: "This first part of the FIA WEC is awarding us with a lot of satisfaction: after the victory of Sebring, the podium in Spa confrimed that we can probably fight for top positions for the whole season. In June we will also go to the 24 Hours of Le Mans as classification leaders of our class, this will make the French race even more exciting".