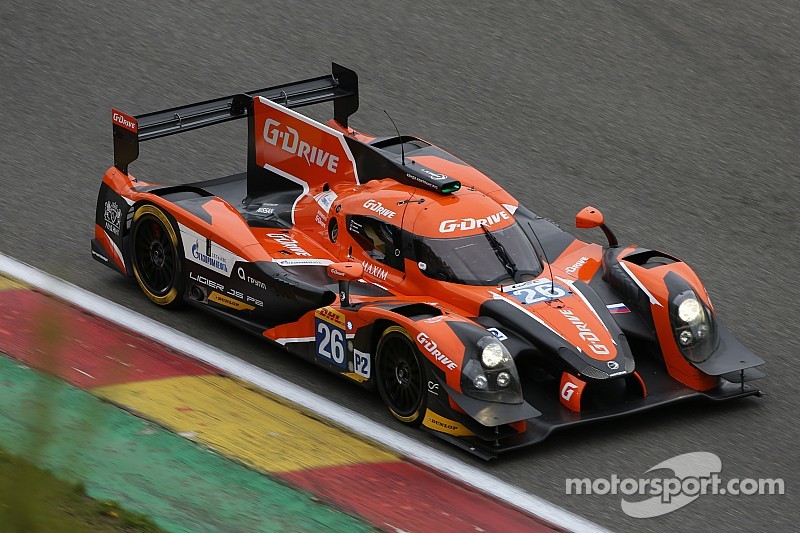 Pipo Derani, Gustavo Yacaman and Ricardo Gonzalez, has finished in 2nd place in LM P2 at the 6 Hours of Spa.

The #28 G-Drive Racing, driven by Pipo Derani, Gustavo Yacaman and Ricardo Gonzalez, has finished in 2nd place in LM P2 at the 6 Hours of Spa, the 2nd round of the FIA World Endurance Championship. Their teammates, Roman Rusinov, Julien Canal and Sam Bird, in the #26 G-Drive Racing, finished in 10th after suffering an engine failure in the 5th hour of the race.

Following on from their 1-2 result at Silverstone, and their pole position yesterday, hopes ran high for this race for the Russian team. Starting in 1st and 3rd respectively, the #26 and #28 G-Drive Racing, both shod on Dunlop tyres, had a difficult start as the opening lap traffic forced them to drop back a few places. It only took Sam Bird thirty minutes to reclaim the lead in the #26, with Pipo Derani in the #28 managing to hold onto third. As the race settled into a rhythm, both cars kept their positions and after double stinting, proceeded to pit at the same time to change drivers.

I’m quite happy to be leading the championship in my first year.

Julien Canal took over the #26 G-Drive Racing Ligier JS P2-Nissan for the 2nd double stint, and had to fight off Mitch Evans in the #38 Jota Sport Gibson 015S, losing the lead to him fifteen minutes into his stint. Although the gap quickly widened, being a silver driver fighting against a gold driver, Canal managed to set a good pace and not lose hold of his second place. About 20 seconds behind him was teammate Gustavo Yacaman, in the #28 G-Drive Racing, who had a very steady double stint, keeping a regular gap behind his team mate and staying about 30 seconds ahead of the #43 Team Sard Morand Morgan LM P2 Evo for his whole stint.

As soon as Roman Rusinov took over the wheel of the Ligier JS P2 #26 G-Drive Racing, he started to catch up to the lead, closing up the gap with each lap. Performing to his best, the gap had shrunk to 25 seconds by the time he handed over to Sam Bird for the last push. Just as Bird took to the track, the #26 had a problem with the engine and had to return to the pits where it was pushed straight into the garage. After analyzing the problem, the team did what was needed to the engine so that Roman Rusinov could head back out on track for one last lap, which was all that was missing to complete 70% of the race and so score two points in the championship.

This left G-Drive Racing’s hopes of a podium finish resting on the shoulders of the #28. Ricardo Gonzalez did a very good double stint, carrying on his teammate’s work, and brought the car back in 3rd to hand to Pipo Derani for the final push. With the #26 out of the running, the #28 went up to 2nd place, where Derani kept it going until the end, finishing a lap behind the #38 Jota Sport Gibson 015S.

As the Jota Sport team is not a full season entry in the world championship, the #28 scores the full 25 points and is now leading the championship with 44 points, closely followed by the #26 with 28 points.

Sam Bird, #26: “Today was the 6 Hours of Spa. We started on pole position and we led by about 10 seconds when I did my driver change, so a reasonable driver stint. After that, Julien and Roman did a very good job. The Jota Motorsport car was untouchable today. We did our best to hang on to the back of it, but that proved very difficult. Unfortunately when I came back into the car for the final stint of the race, the engine gave up and blew up in quite a big fashion but the boys did a great job and we got back out again to finish the last lap, albeit with a broken engine, but to get some points. Well done to the sister car as well; the car #28 did a super job to get the maximum points today, which is very good for the team.”

Gustavo Yacaman, #28: “I’m very happy for this second place; it was a very hard race for us. I am not happy for our teammates; it’s not fair what happened to them, but it’s racing and it can happen to anyone. There are a lot of things we need to learn and analyse from this race, because we weren’t where we need to be. So we’ll move on and prepare for the 24 Hours of Le Mans. It will be my first time in Le Mans, so I have to be very focused and work very hard to get a good result there. If we keep at it, it’s the way to win championships. I’m quite happy to be leading the championship in my first year. »

Roman Rusinov #26: I think there is a lot of positive things we can gain from Spa. We have a good pace but our V8 Nissan engine failed after five hours of race. With car #26 it is always the best or nothing and I am happy to keep it this way, we have 6 races in front of us and definitely it will be a good year. Now we need to get prepared for Le Mans and analyse the engine failure causes.

Philippe Dumas, Team Principal: "There are races like this, we’ll have to take a look at it. It’s not bad to get a bit of competition now and then, and we’re going to work hard for Le Mans. I’m going to remember how well the team worked today. They’ve never been better with the pit stops, the organisation and the strategy. We probably weren’t quick enough during the race, and we need to look at it. Of course, it’s a pity for the Ligier JS P2-Nissan #26, but it’s motorsports and these things happen. In the end, we need to retain the positives – the #28 scored 25 points, we’re going to be 1st and 2nd in the championship, we’ve scored a lot of points. That’s also a way to lead a championship."

Nakajima should not rush return - Davidson