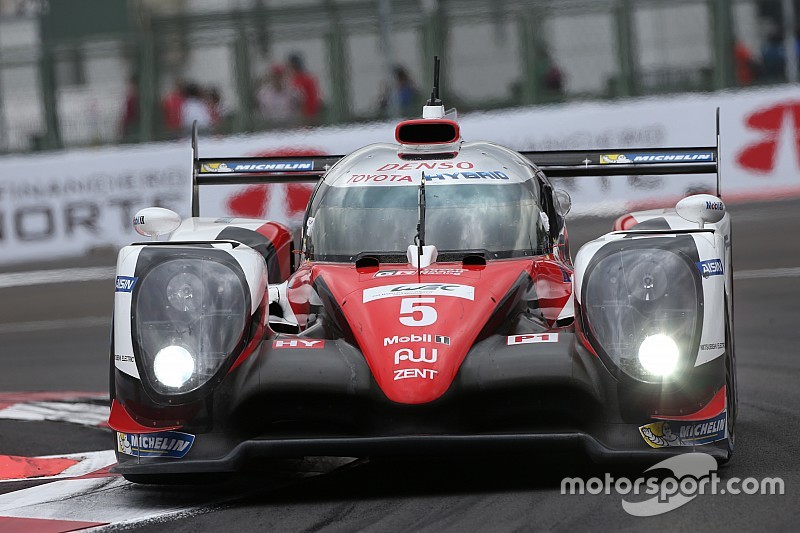 Toyota Gazoo Racing returned to the podium in an exciting 6 Hours of Mexico, the fifth round of the 2016 FIA World Endurance Championship (WEC).

Stéphane Sarrazin, Mike Conway and Kamui Kobayashi in the #6 TS050 Hybrid overcame a difficult start to the event, which saw them miss Thursday practice due to an accident, to finish third. That result elevates them to second in the drivers’ World Championship.

Only one TS050 Hybrid finished the race, with the #5 car of Sébastien Buemi and Kazuki Nakajima forced to retire due to an electrical issue on the powertrain when challenging for a podium finish.

At just 4.304km, the Autodromo Hermanos Rodrigues is the shortest on the WEC calendar and this forced the LMP1 cars to regularly fight their way through lapped traffic, creating an action-packed race with occasional contact.

After 90 minutes one such incident saw Mike, at the wheel of the #6, clash with an LMP2 car, earning him a drive through penalty which cost 20 seconds. The car was, however, not damaged.

More misfortune struck Toyota just a few minutes later when an electrical issue on the powertrain forced Kazuki in car #5 to pit for repairs. Unfortunately the problem could not be repaired quickly and the car retired.

Soon after half distance, an exciting race took another twist when rain struck. Stéphane, running fourth at that stage, immediately brought the #6 TS050 Hybrid in for wet tyres to cope with the increasingly slippery track.

Position changes were frequent and the #6 ran third until the #7 Audi, on Hybrid intermediate tyres, got past. But Stéphane put in a brilliant performance to twice pass the #2 Porsche for third either side of a tyre change for slicks.

Soon the #6 moved ahead of the #7 Audi for second place prior to its final pit stop, when Hybrid intermediate tyres were fitted in anticipation of rain during the final laps.

Stéphane stayed behind the wheel and safely brought the car home in third place for the #6 crew’s third podium of the season, just 8.267 seconds behind the second-placed Audi #7 and on the same lap as the race-winning #1 Porsche.

Toyota Gazoo Racing is back in action in just two weeks, when the WEC field travels north to Austin for the 6 Hours of Circuit of the Americas on Saturday 17 September, the sixth of nine races this season.

Toshio Sato, Team President: “It has been a challenging week for us in Mexico but the team never gave up and this result is a deserved reward. It’s a pity about the issue for the #5 crew as I am sure they also would have been strong. Everyone has worked hard to improve our package for high-downforce circuits and the team did a great job. I am really happy to show this good performance in front of the Mexican fans and our colleagues at Toyota Mexico, who have been extremely supportive. We improved continuously through the week and the target now is to improve further for Austin and fight again at the front.”

Sébastien Buemi: “Congratulations to car #6 on the podium and on being second in the World Championship, which is impressive. I am very disappointed in our race because I had a competitive first stint. We showed that we had good pace and I could follow closely the Audi and the Porsche. It’s nice for the team to have a podium but now we focus on Austin.”

Kazuki Nakajima: “It was a difficult day for us but a good result for car #6 to get a podium for the team. I am happy for them and pleased to see how competitive the car was. It was an exciting race to watch but I would prefer to be racing; it’s a pity that we couldn’t finish because we had strong pace at the beginning.”

Stéphane Sarrazin: “I was really frustrated about my crash on Thursday because it’s not like me. But the mechanics did such a great job working all night to prepare the car. We all give our best and sometimes we start an event with difficulties but we finish in a positive way. When I was in the car I was thinking about the mechanics, which motivated me to push even harder. I felt so good in the car and with Mike and Kamui, as well our engineers, we have a great package. It’s amazing to be on the podium and to be second in the championship.”

Mike Conway: “It’s fantastic to get a podium here. At the beginning it was looking difficult but my stint was going well until I unfortunately got the drive through penalty. After that the pace was good and we could double stint the tyres which was an advantage. Stéphane did a brilliant job; as the track got drier he just got quicker. It looked like we had a chance for second which would have been amazing but the rain came a bit too late. All credit to the mechanics for getting the car over the finish line; it’s been a big team effort.”

Kamui Kobayashi: “We didn’t expect this. The week had been difficult for us but to achieve a podium finish is just great for everyone. The mechanics had a really hard week so I think they deserve this, along with the whole team. It was fun to stand on the podium and see their reaction. After qualifying no-one would predict we would be pushing for second place so I’m really happy with our race.”