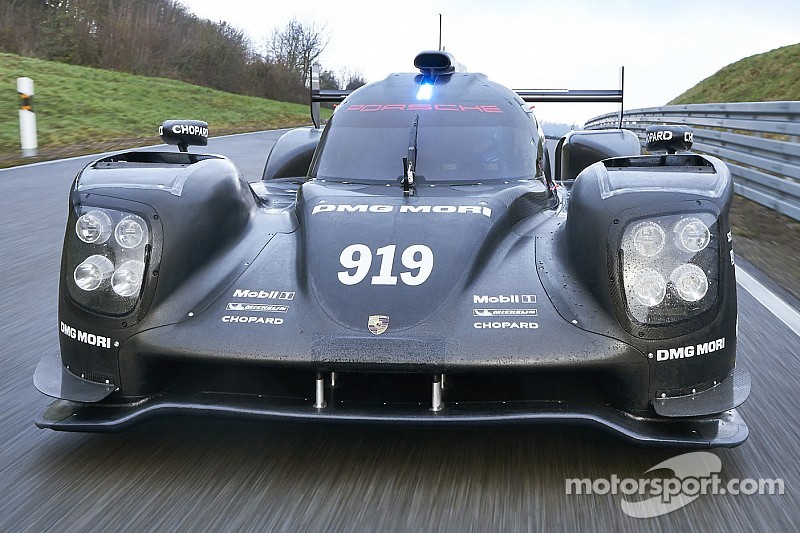 The evolution of the Porsche 919 Hybrid will be officially presented on March 26th on the Circuit Paul Ricard circuit in Southern France.

Stuttgart – Following its maiden win at the 2014 season’s final race in Brazil, more podium finishes are the aim for the future for the Porsche 919 Hybrid in the 2015 FIA World Endurance Championship (WEC). This is the objective the company announced today at the annual press conference held by the Le Mans organisers, the Automobil Club de l’Ouest (ACO), in Paris. To reach that goal the 919 Hybrid has been significantly developed in many areas.

This year Porsche enters a third prototype for the 24-Hours of Le Mans on June 13th/14th, as well as in the previous championship round, the Six-Hours of Spa-Francorchamps on May 2nd. In Paris, Porsche announced who will be driving that third car alongside Formula One driver Nico Hülkenberg (27, Germany), whose participation was announced at the end of 2014. The company has selected Earl Bamber (24, New Zealand) and Nick Tandy (30, Great Britain) to join him. Both Bamber and Tandy have been testing the 919 Hybrid and remain active as Porsche works drivers in the GT category.

Drivers have to view everything as the bigger picture. In every regard, I have full faith in our driver line-up.

Wolfgang Hatz, who is Porsche AG’s board member for research and development and also responsible for motorsport, commented about the expectations before the press conference: “The LMP1 programme’s most important target is the research and development of future technologies for our road cars. For Porsche as a sports car manufacturer the credo always is to pair maximum sportiness with the highest possible efficiency.

The WEC’s revolutionary consumption regulations form an ideal research field for this. In 2014 we introduced a very brave powertrain concept for the 919 Hybrid and it instantly proved itself. This enabled us to make the car’s second generation a comprehensive evolution instead of an entirely new development. In 2015 we want to compete with an able-to-win package.“

In 2014, when entering the Porsche 919 Hybrid for the first time and competing in the eight world championship rounds, the Porsche Team achieved six podium finishes – including its maiden win at the season’s finale in Brazil.

During the Paris press conference the ACO confirmed the car numbers requested for the Porsche 919 Hybrid. The trio of Timo Bernhard (33, Germany), Brendon Hartley (25, New Zealand) and Mark Webber (38, Australia) gets number 17. Number 18 goes to the – also unchanged from 2014 – driver combination of Romain Dumas (37, France), Neel Jani (31, Switzerland) and Marc Lieb (34, Germany). The third car with Hülkenberg, Bamber and Tandy will compete in Spa and Le Mans with number 19.

Fritz Enzinger, LMP1 Vice President, explained: “It goes without saying that each of these drivers is fast and clever. But in the WEC, and especially in Le Mans, there are more qualities to be taken into account. The ability to stay focussed constantly and to deliver consistent performances are must-haves for endurance racing. Another factor is team spirit and the skills to integrate into the team. This sport doesn’t make sense for loners. Each driver always has to take into account his teammates, as their individual speeds are what in the end are reflected by the Porsche Team’s results. Also a strong understanding is required of the skills and consequences when lapping slower cars. This isn’t for egocentrics either. Drivers have to view everything as the bigger picture. In every regard, I have full faith in our driver line-up.”

Team Principal Andreas Seidl added: “We are very happy to be allowed to enter a third car in what is only our second season. This shows once more how strongly the company backs the LMP1 programme. At the same time we face the operational side and need to be respectful of what it takes when entering three of those complex prototypes and handling nine drivers in Spa and Le Mans. In this regard it was also important to leave the proven driver combinations from last year untouched. These six now know all about each other and all the tracks on the WEC calendar. In 2014 the entire team was a newcomer. Now we can build on lessons learnt and our targets are more ambitious. Le Mans will be new territory for Nico Hülkenberg, as well as for Earl Bamber, and we will give our outmost to support them.”

The evolution of the Porsche 919 Hybrid will be officially presented on March 26th on the Circuit Paul Ricard circuit in Southern France. The next two days will see the first joint test for the entire 2015 WEC field, the so called prologue. Porsche is excited to experience the first encounter with the competition’s works cars.