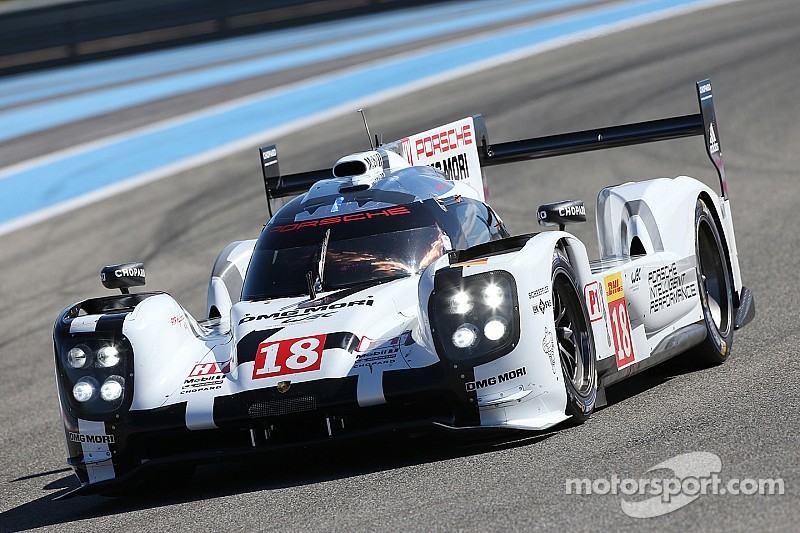 Porsche has come out of the box swinging at Circuit Paul Ricard.

After setting a blistering pace this morning Marc Lieb continued an impressive turn of speed in the #18 Porsche 919 Hybrid. The German eclipsed his best time from this morning by taking off a further 1.3 seconds to register a fastest lap of 1m37.965s.

The time set by Lieb was over three seconds faster than the best time from the 2014 Prologue, which was a 1m41.289, set by Brendon Hartley.

The No.17 Porsche driven by Mark Webber, Timo Bernhard and Brendon Hartley took second in the quicker afternoon running. Webber set a 1m38.552 late on in the session in what were sunny but very windy conditions.

Third was the No.7 Audi R18 e-tron quattro lapping just under 0.5s faster than the sister #8 car. Audi undertook much less track running than their category rivals today as they evaluated many different aspects of their new-look LMP1-H car.

Toyota Racing continued to add many laps on to their significantly developed TS 040 Hybrid. The reigning champions completed 132 laps this afternoon in total, placing fifth and sixth overall.

The KCMG ORECA 05 once again led the way for most of the four hour session in LMP2 with class newcomer Nick Tandy getting to grips with his new challenge in an impressive manner. The British racer will compete for all except the Spa and Le Mans rounds of the WEC this season. He set a best lap of 1m48.722 but this beaten by Christian Klien in the Team SARD Morgan-Evo. The Austrian set a 1m48.325s lap. Also setting a very later lap was British ace Sam Bird in the G-Drive Racing Ligier JS P2-Nissan to go P2.

Porsche at the top in GTE as well

The Dempsey-Proton Racing LMGTE Am example driven by Klaus Bachler/Christian Ried and Khaled Al Qubaisi set the best time of 1m58.959s in the afternoon session.