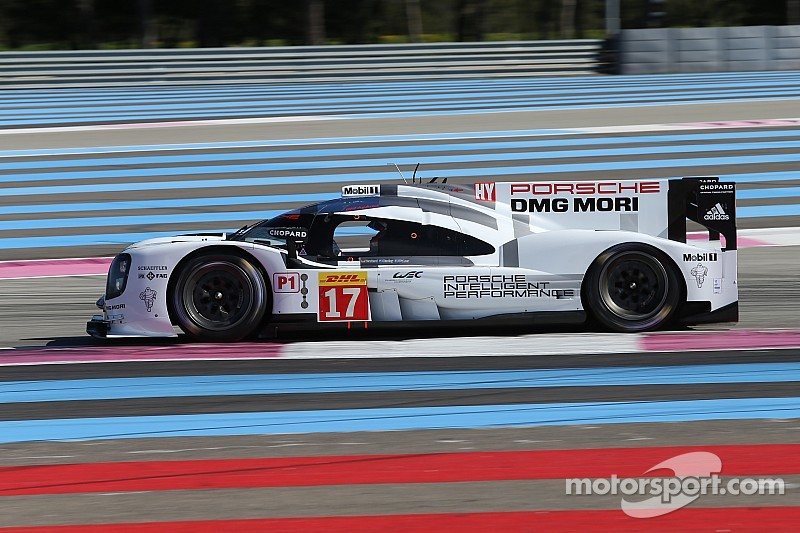 Porsche continues to pace quicker than all rivals.

Porsche completed a very promising first day of official testing at Paul Ricard today as they converted their pace during the daytime running in to the night session.

Swiss driver Neel Jani set the fastest overall time of the day - 1m37.220s - in the early stages of the two hour night session on Friday evening.

It was difficult to conclude whether Porsche had been so quick today or whether Audi and in particular Toyota had been overly conservative. With a strong Mistral tail wind and no accurate external knowledge of what fuel flow/power outage the main protagonists were running, it was very difficult to make any firm conclusion.

However, with Jani’s time of 1m37.220s beating last years’ time by a full four seconds, it certainly points to a major upgrade in raw pace for the 2015-spec LMP1-H cars.

Audi again elected to run minimal laps yet still emerged third on the timing screens.  Combined, the pair managed just 44 laps between them, compared to the 124 from Porsche tonight.

Toyota appeared to be running conservatively in the night session with the No.1 Toyota TS 040 HYBRID LMP1-H designs heading the No.2 car.

Reigning champion Anthony Davidson claimed the fifth best lap this evening on a 1m40.378s lap, while Stephane Sarrazin was just behind on a 1m41.309s.

KCMG’s Matthew Howson ruled the roost in the LMP2 category times with the all-new ORECA 05-Nissan on a 1m47.456s.

James Calado proved to be the fastest in the LMGTE category with a 1m59.009s lap in the AF Corse Ferrari he shares with Davide Rigon.

Stuart Hall crossed the line in his Aston Martin Vantage V8 to set a 2m00.582s best. He will share the car this season with Roald Goethe and new Aston Martin recruit Francesco Castellaci.

The second and final day of testing begins tomorrow with two 4-hour sessions will begin at 09.00 local time.