Porsche tops charts in first ever night practice in Bahrain 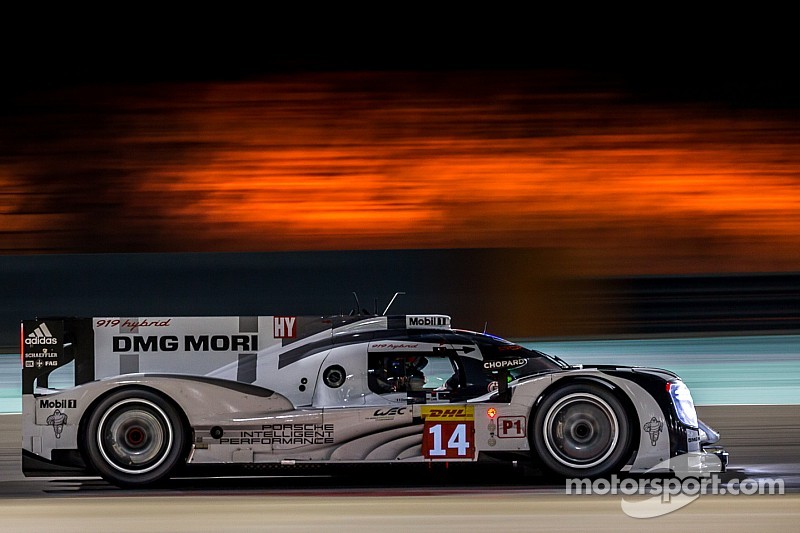 A little bit of history was made in the FIA World Endurance Championship tonight when the 27 competitors took to the track for the second Free Practice Session under fully floodlit conditions.

There are 495 posts and 5000 lights around the perimeter of the 5.41 km spectacular Bahrain International Circuit, and the FIA WEC’s drivers have now experienced the full effect for the first time as they completed ‘night’ practice under the lights. Saturday’s 6 Hours of Bahrain will be the third race of the 2014 season to run into the hours of darkness, but the first where permanent track lighting is used.

The first session under the lights at the Bahrain International Circuit ended with the no14 Porsche 919 hybrid of Neel Jani posting a time that was 0.8 seconds faster than the no8 Toyota TS040 and two seconds quicker than the best time set by the championship leading car in the earlier session. Each driver was obliged to complete three full timed laps during the night session and everyone was able to do this.

All the teams improved their best times compared to the first Free Practice session, with the no20 Porsche finishing third fastest, one second behind their teammates and one second ahead of the two Audis, with the no1 car setting the quicker time of the two R18s.

The two Toyota powered Rebellion R-Ones finished seventh and eighth, with the no12 car leading the way in the LM P1-L. After the earlier gearbox failure, the Lotus mechanics worked hard to get their drivers out on track. However late into the session Pierre Kaffer had to return to the pits after the car was reported to be dropping oil.

The no26 G-Drive Racing Ligier-Nissan was once again the lead car in LM P2, finishing the session 0.7 seconds ahead of the no37 SMP Racing Oreca-Nissan, with Olivier Pla improving the time set in the first session by 0.2 seconds. The KCMG Oreca-Nissan was third fastest, one second behind the G-Drive Ligier.

Aston Martin Racing’s No.95 Vantage V8 flew to the top of the LM GTE timesheets in the hands of Dane Nicki Thiim. The LM GTE Am competitor’s lap of 1:58.440 was the quickest of the day so far and a full second ahead of the leading Pro car, the No.51 AF Corse Ferrari of GT Championship leading driver Gianmaria Bruni.

Bruni and his team mate Toni Vilander were chased hard by the No.91 Porsche Team Manthey entry of Jörg Bergmeister and Richard Lietz, the 911 RSR clocking its fastest lap at 1:59.704 – three tenths of a second behind the Ferrari 458 Italia. The German-Austrian duo’s team mates in the No.92 were one tenth behind them – although separated by another LM GTE Am entry, the No.88 Proton Competition Porsche 911 RSR – and just ahead of the Lone Star Le Mans winning No.97 Aston Martin of Darren Turner and Stefan Mücke.

Fourth in the combined LM GTE classification but second in the LM GTE Am class was the rapid Klaus Bachler in the No.88, a car he is sharing with local star Khaled Al Qubaisi and team boss Christian Ried. Also showing well in this session, which required all drivers to complete a minimum of three timed laps as it is officially a night practice, was the No.75 Prospeed Competition 911 RSR of François Perrodo, Emmanuel Collard and the youngest driver in the field, 19-year-old Matthieu Vaxivière.

A third and final practice session of one hour will take place tomorrow at 11h10 which will give the teams the final chance to complete their set up before qualifying which starts at 17h00.

Toyota on chart in P1 in Bahrain