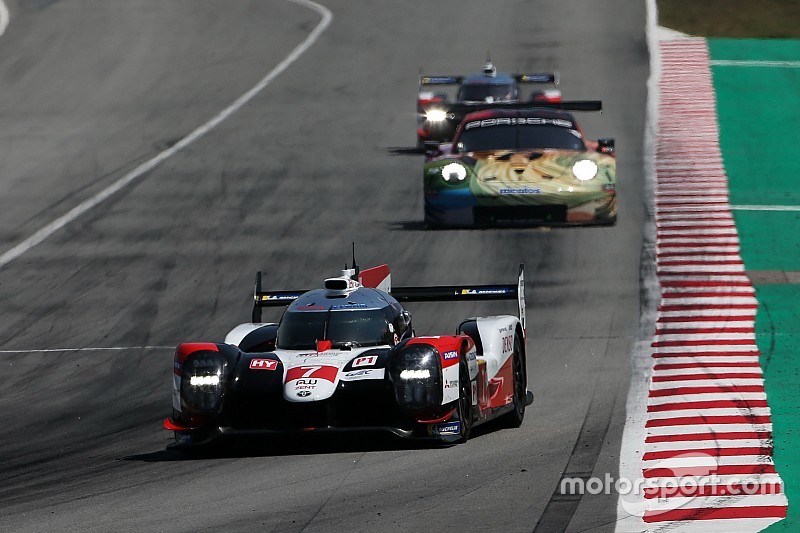 Only 14 of the 30 cars entered took part in the final four-hour session of the two-day test, with many teams opting to call time on their running early - some in order to travel to the Spa 24 Hours ready for the first day of on-track action for the Belgian classic on Thursday.

All six LMP1 cars hit the track and improved on their previous times with Toyota's pair of TS050 Hybrids again locking out the top two positions.

Jose Maria Lopez set the pace in the #7 car with a 1m29.141s in the opening hour, an improvement of almost half a second on his Wednesday morning time, while Kazuki Nakajima set the best time in the #8 Toyota, a 1m29.187s, in the second hour.

The quickest of the two Gibson-powered R-13s, the #1 car, ended up only 0.267s off the pace in the hands of Gustavo Menezes, lowering the Swiss squad's best time of the week by six tenths.

Bruno Senna likewise dipped below the 90-second barrier in the #3 Rebellion, but found himself beaten by the best of the Ginetta G60-LT-P1s in the dying stages.

Both of the Team LNT-run cars made improvements in the closing minutes, Formula 2 racer Luca Ghiotto setting a time only 0.556s off the pace in the #6 machine to leapfrog the second Rebellion for fourth.

Charlie Robertson's effort in the sixth-placed #5 Ginetta was just over a second off the pace.

SMP Racing driver Egor Orudzhev finally got his first running of the week in this session, driving both Ginettas, but suffering an early spin at the chicane early on.

Only five of the eight LMP2 cars took part in the test, the fastest of which was the TDS-run Racing Team Nederland Oreca 07 thanks to a late effort of 1m31.659s by Nyck de Vries.

RTN has confirmed it will race Michelin tyres this season after spending time testing both the French rubber and rival brand Goodyear this week.

Both Jota Sport-run Orecas and the Cool Racing Oreca sat out the final session, as did the entire contingent of five GTE Pro cars.

Just three of the 11 GTE Am cars appeared, with Thomas Preining setting the fastest time in class of 1m44.523s early on in the #88 Dempsey-Proton Racing Porsche 911 RSR.