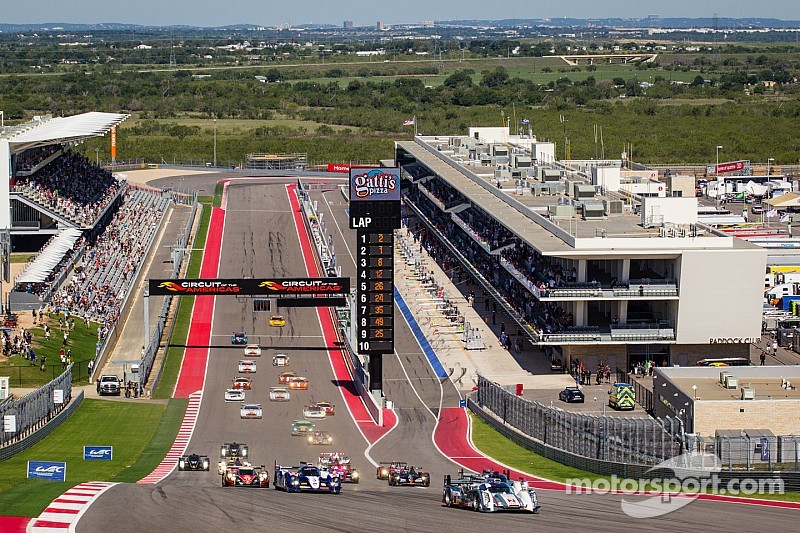 After a three month break, the WEC gets back racing in Austin, Texas.

The provisional entry list for Round 4 of the FIA World Endurance Championship, the 6 Hours of Circuit of the Americas, has been unveiled with 29 cars due to take the start on Saturday 20 September.  Three teams from the USA will be joining the grid, one each in LMP2, LMGTE Pro and LMGTE Am.  This will give American fans the chance to see the Corvette Racing C7.R taking on the manufacturer teams from Aston Martin, Ferrari and Porsche on home soil for the first time.

The race for the world title will resume in Texas with the No.8 Toyota TS040 of Anthony Davidson, Nicolas Lapierre and Sébastien Buemi currently leading the Drivers’ points table.  Toyota is also holding the top spot in the Manufacturers’ title race and is looking forward to racing against its sister Toyota and the two car entries from both Porsche and Audi.  Among the Toyota driver line up at the Circuit of The Americas will be Mike Conway, the Briton making his race debut in the No.7 entry in place of Kazuki Nakajima.   The challenge from the two German manufacturers will resume after the summer break, with the 24 Hours of Le Mans-winning crew of Marcel Fässler, André Lotterer and Benoît Tréluyer leading the chase, and looking to add a second victory to their 2014 tally.

The event marks the debut of the new Lotus T129-AER, which is ready to challenge the Rebellion Racing R-One Toyotas in the LMP1-L class.  Christophe Bouchut and James Rossiter have been announced in the Lotus, with the name of the third driver still to be confirmed.  The two three-man crews in the Rebellion cars are unchanged, with current title leaders Nicolas Prost, Nick Heidfeld and Mathias Beche in the no12 Rebellion R-One looking to continue their 100% record of wins in 2014.

In the LMP2 class double class winner G-Drive Racing is switching from the Morgan to the new Ligier JS P2 chassis, with Roman Rusinov, Olivier Pla and Julien Canal hoping to put the disappointments behind them of failing to finish last time out at Le Mans, and return to winning ways in Texas.  SMP Racing will be entering two cars once again, with Sergey Zlobin and Anton Ladygin currently at the head of the LMP2 drivers’ table after taking maximum points at Le Mans in June.  KCMG regulars Matt Howson, Richard Bradley and Tsugio Matsuda will be racing in the team’s ORECA 03R Nissan.

The HPD name will make a welcome return to the LMP2 class with an extra entry from North American team, Extreme Speed Motorsports.   Scott Sharp, Ryan Dalziel and Ed Brown will be taking on the four regular FIA WEC entries for glory at the Circuit of the Americas in their HPD ARX 03B-Honda.

The two-car teams from Aston Martin Racing, AF Corse Ferrari and Porsche Team Manthey in the LMGTE Pro class will, for this fourth round of the FIA WEC, be joined by a famous American sportscar name.  A factory-entered Corvette C7.R will be driven by Ricky Taylor, Jordan Taylor and Tommy Milner, the younger of the Taylor brothers (Jordan) having been part of the crew that took second place at the 24 Hours of Le Mans.  In France, Corvette finished behind the no51 AF Corse 458 Italia of reigning GTE World Champion and current GT Drivers’ points leaders, Gianmaria Bruni and Toni Vilander.   The no71 AF Ferrari will be driven by Davide Rigon and James Calado.

The crews of the two Porsche 911s are unchanged with Marco Holzer and Fred Makowiecki, fresh from their Le Mans podium finish in June, in the no92 Porsche and Patrick Pilet and Jörg Bergmeister in the no91 car.  The Aston Martin Racing line up is also unchanged with Darren Turner and Stefan Mücke in the no97 Vantage V8 and Alex MacDowall, Darryl O’Young and Fernando Rees in the no99 car.

In the LMGTE Am class, a familiar name returns to the FIA WEC with Krohn Racing, the team that raced in the championship in 2012 and 2013, entering its Ferrari 458 Italia for Texan Tracy Krohn, Sweden’s Nic Jönsson and Briton Ben Collins who drove with the team at Le Mans. In total there are eight cars entered in the LMGTE Am class with the no95 Aston Martin Racing Vantage of Danish duo Kristian Poulsen and David Heinemeier Hansson currently leading both the Team and Driver Championships after victory at Silverstone and at the 24 Hours of Le Mans.  They will be joined in Austin by New Zealander Richie Stanaway who raced with the team in the WEC last year.  Canadian Paul Dalla Lana will be joined once again by Pedro Lamy and Christoffer Nygaard in the no99 Vantage for the North American round.

The Ferrari 458 of USA team 8Star Motorsports will be raced by the Italian pairing of Gianluca Roda and Paolo Ruberti, and two further F458s will be run under AF Corse colours.  The no61 Ferrari will be driven by Luis Perez-Companc, Marco Cioci and Mirko Venturi, who finished 3rd in class at the 24 Hours of Le Mans behind the no88 Proton Competition Porsche 911 of Christian Ried, Klaus Bachler and Khaled Al Qubaisi.  The second Porsche 911 is entered by Proton Competition for the French trio of Emmanuel Collard, François Perrodo and Matthieu Vaxivière.

The 6 Hours of Circuit of the Americas is part of the Lone Star Le Mans event at the circuit in Austin, Texas on the 18-20 September and marks the beginning of the second half of the 2014 season.  The race in the USA will be followed by 6-hour races in Japan, China, Bahrain and culminating in the season finale in Sao Paulo, Brazil on the 30 November.

Krohn Racing to compete in Six Hours of COTA

Porsche is preparing for part two of the World Endurance Championship