Rebellion Racing driver Norman Nato has expressed his regret over the “stupid mistake” in Sunday’s FIA World Endurance Championship opener at Silverstone that hospitalised one of the team’s mechanics.

The incident occurred when Nato made the #1 Rebellion car’s third stop to switch from slick tyres to wets during a rain shower in the second hour of the four-hour race and lost control, knocking over three of his mechanics.

Two of these escaped the incident uninjured, but one – a mechanic working for the Oreca organisation that is largely responsible for running Rebellion’s two Gibson-powered R-13s – had to be taken to Northampton General Hospital with a broken big toe on his left foot.

Nato, who was making his LMP1 debut and first race outing for Rebellion, admitted the incident was down partly to his lack of experience.

The Frenchman told Motorsport.com: “I didn’t practice enough during free practice with all the procedures. What happened is that in the pitlane when we decided to go for wet tyres, I was focused on changing my setting.

“I was a bit lost in the pitlane because it was a bit of a mess with everyone pitting at the same time. I didn’t really see where the team was. And when finally I see where my box, it was already a bit too late.

“When I turned, I just completely locked the front wheel and it was impossible to turn. It was like being on ice. I would say it’s a stupid mistake. Lack of experience with the car, tricky conditions. It’s my mistake and I will learn from it.”

Nato and his teammates Gustavo Menezes and Bruno Senna were on course to finish fourth behind the sister #3 car before a late five-minute trip to the garage dropped the #1 Rebellion to fifth in LMP1, behind the lead Ginetta, and 10th overall.

Menezes explained the Nato incident, which initially cost the #1 car a lap, had damaged the car and late power steering issue was the reason behind the late stoppage.

“We stopped at the end because we were out of the fight for the podium,” the American told Motorsport.com. “We were having some power steering issues and one of the sensors was broken, so we couldn’t see how far it was.

“We were worried about having a bigger issue. So we just made sure things are safe and brought it home. There was a lot of saturation in the power steering, it was twitching on and off, we didn’t want to take any risk at that point.”

The #3 Rebellion shared by Pipo Derani, Loic Duval and Nathanael Berthon took the final podium spot behind the two Toyota TS050 Hybrids, although it dropped off the lead lap with a pair of late penalties for fuel flow offences. 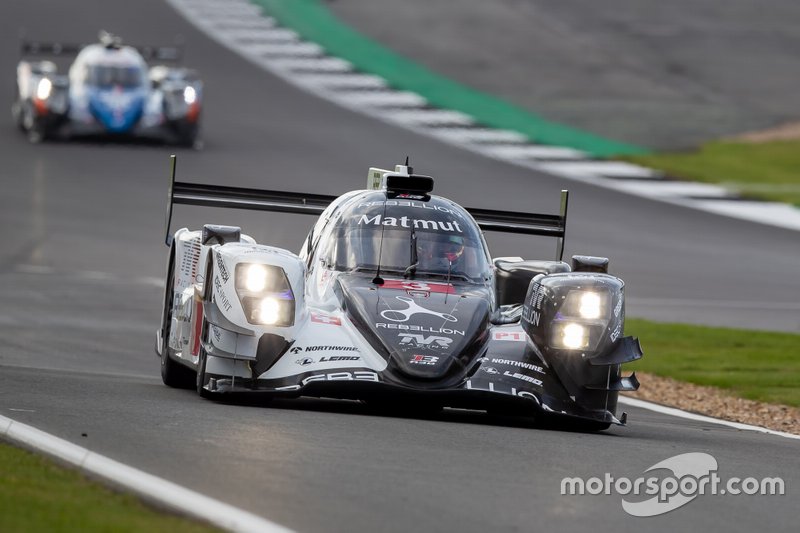