REBELLION Racing 4th at the 6 Hours of Shanghai

REBELLION Racing’s drivers, Andrea Belicchi, Nicolas Prost and Mathias Beche combined strong pace with good strategy from the team to achieve a solid result in China with a fourth place finish at the FIA World Endurance Championship 6 Hours of Shanghai. The #12 Lola-Toyota ran without any problems or alarms, the drivers were faultless and the pit stops were clean and routine for the experienced crew. With 1h30 to go in the race, the factory Toyota #8 was forced to retire, thus promoting the sole privateer LMP1 of REBELLION Racing from fifth to fourth place.

As a proof of the good preparation of the cars by the Swiss team and the consistency of their drivers, a REBELLION Racing Lola-Toyota took the chequered flag for the 15th time in 15 starts this season. With this strong result in China, REBELLION Racing also record their sixth class win in seven races in the 2013 FIA Endurance LMP1 Teams’ Trophy. 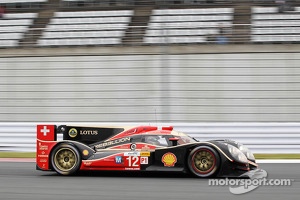 REBELLION Racing secured the win of the 2013 FIA Endurance LMP1 Teams’ Trophy at the previous round in Japan.

Andrea Belicchi : “ For me Shanghai was my first proper race after my accident at Le Mans earlier this year. I wanted to see if my ribs would hurt or not. I started the race for the team today and did two consecutive stints and all went well for me. I am pleased with what we achieved today with Nico and Mathias. It's my second consecutive class win here in Shanghai, so I am happy with my weekend. ”

Nicolas Prost : “We had a strong race today, the car was good and my stints went well. The pace of the factory cars on this track with the hybrid was really too high for us. We are motivated to do our best at each race, but I hope that the privateer field will inrease next year to provide us some competition. We will have the last race with the Lola-Toyota in two weeks time, it's a strange feeling as I’ve driven the Lola from my first days with the team in 2009, but I can't wait to start the development of the new REBELLION R-One !”

Mathias Beche : “ When you don't have the right pace for the overall podium the races are long, especially today as I had to triple stint. Anyway this a great opportunity for me to improve myself each time I am in the car. If I have the chance to stay with REBELLION Racing next year, I hope the new R-One to be closer to the factory cars. It will be better for the sport and for the show !”

Bart Hayden - REBELLION Racing Team Manager : “We had a trouble free run in the race, the pace of the factory cars was too much for us today, but we have done our best and that is why everyone in the team can be proud of what we are achieving this season. We were on the podium as the LMP1 Privateer winners and the guys performed well in the pit stops as well as on the track. We are now looking forward to the FIA WEC finale in Bahrain, where we will be targeting a podium to end this great season for the team on another high note.”

6 Hrs Shanghai: Aston Martin and Ferrari victorious at the finish