Rebellion Racing back to Asia for the 6 Hours of Shanghai

The driver lineup will see for the first time this year Nicolas Prost, Andrea Belicchi and Mathias Beche sharing the wheel of the #12 Lola Toyota.

The REBELLION RACING team returns to Asia for the seventh race of the 2013 FIA World Endurance Championship. 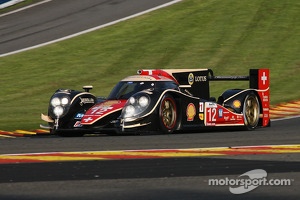 Comprising long straights and short turns, the track hosts the F1 Grand Prix of China, it has been a regular fixture on the Formula 1 calendar since its inauguration.

Nicolas Prost: " I am pleased to be back in the FIA WEC after missing the race in Fuji, but winning for the second time in a row the ALMS Petit Le Mans is a good excuse ! I like the Shanghai track, not because of the layout in particular, but because it’s a demanding circuit, especially the middle sector. It’s nice to share again the driving with Andrea, we didn’t drive together in the same car since Petit Le Mans 2012."

Andrea Belicchi: "Shanghai is a track that I like and I have good memories from last year’s race as I finished first in the Privateer classification and fourth overall. I don’t know what to expect in terms of result with four factory cars in front of us but we will do our best to race closely from them. I am pleased to drive with Nico again, it’s been a long time since last year’s Petit Le Mans."

Mathias Beche: "It’s cool to be back in China as I started driving single seaters here and I lived not far from the circuit in Shanghai. I know the track well from that time and I raced here last year in the final round of the FIA WEC, wining the race in LMP2. We will certainly be a bit behind the factory cars, but we must continue our efforts and take every opportunity that presents itself."

Bart Hayden, REBELLION Racing Team Manager : "We will be competing at the 6 Hours of Shanghai with no pressure as we have achieved all our targets for this season. We won the FIA Endurance LMP1 Trophy for Privateer Teams for the second time after our win in 2012 and we won the closing race of the American Le Mans Series in a back-to-back victory at Petit Le Mans two weeks ago.

On top of that we achieved two overall podiums in the FIA WEC at Interlagos and Fuji. But our determination will remain high to achieve a strong result here in Shanghai. Our car and crew are as well prepared as ever, so targeting a podium finish in Shanghai is still our objective."

Rigon to Shanghai for the Championship